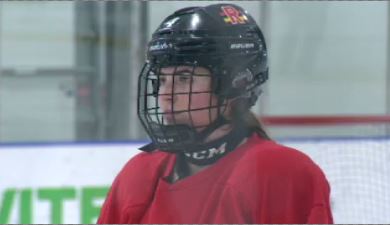 It’s the dream of many young hockey players to don the Canadian maple leaf and play with Team Canada in international competition.

For Alexis Petford, a winger for the Regina Rebels Hockey Club, that dream is one step closer to becoming reality. She has been invited to the Under 18 Canada female hockey selection camp.

A grade 12 student at Greenall High School in Balgonie, Petford is the only Saskatchewan player to receive an invite this year.

“It was pretty exciting,” Petford said. “I was at school when I found out. My mom actually got the email and she called me right away. I was actually talking with one of my teachers and my dad also works at the school, so then I kind of ran through the hallways and I was like ‘Hey Dad, you’ll never guess, I got invited to the top 40 camp.’” she said.

Petford’s coach, Mike Merk, is thrilled she is getting this opportunity to compete for the right to represent Canada. It’s well-earned, he said.

“There’s always excitement as a coach that one of your players gets that honour to be able to go to something like this. It’s a big deal to be part of that top 46 in the country. So it speaks volumes to who Alexis is and the player that she is,” he said.

According to Merk, two things stand out when studying Petford the hockey player.

“One, it’s just her heart and desire, you know you can expect her to show up every night. The other is just her natural ability to score. That’s the thing, if she goes there and I think if she can score, she’s going to find herself a spot on that team,” Merk said.

Petford certainly hasn’t had any problem scoring this season for the Rebels. She leads the Saskatchewan Female U18 AAA League with goals (22) and points (40). The closest player in points is her teammate Allee Gerard with 25.

Petford’s on-ice prowess helped the Rebels to a third-place finish in the prestigious Mandi Schwartz Memorial Tournament, along with a first-place finish at the Brampton Two Nations Tournament.

And while it’s one thing to make the selection camp, it would be a dream come true for Petford if she makes the final roster.

“Oh, I don’t even know how to explain it. It’s kind of always a dream I’ve had growing up, and then coming here, and then getting that invite, I was like ‘holy, like I actually am one of the top.’ And then when I got the invite I was like, okay, I have to beat out 12 more players to make this team,” said Petford.