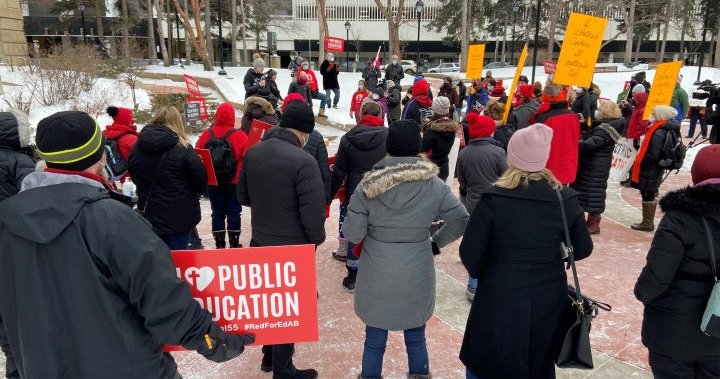 Parents and educators who don’t like the province’s proposed school curriculum aren’t giving up the fight to have it scrapped entirely.

Members of Support our Students and the Alberta Teachers Association held a rally at the McDougall Centre on Saturday.

Parents and educators who attended the rally want the province to go back to the drawing board when it comes to the new K-6 curriculum.

“There are still a lot of concerns with this curriculum which is why we as an association have asked for a moratorium. We need to go back. We can’t fix this. We need to start over from the beginning,” said ATA president Jason Schilling.

On Monday, Education Minister Adriana LaGrange announced the province will delay full implementation of its proposed curriculum for kindergarten to Grade 6 after opposition from some teachers and parents.

“This was a rushed job,” said SOS executive director Medeana Moussa at the rally.

“They want to jam this through still. They want to give parents a little bit of a win by postponing and reworking the social studies curriculum,”

The education minister said all K-6 students will start learning from the new English language arts, math and physical education and wellness curriculum in September of 2022.

But the new curriculum for social studies, French immersion and francophone language arts, science and fine arts will be delayed.

“The province did blink and delayed some of the subjects however they’re completely missing the point. All of the subjects have fundamental flaws,” said Angela Grace, a former teacher and registered psychologist and steering committee member of the Alberta Curriculum Analysis website.

In a letter to the education minister this week the Calgary Board of Education said, “We do have significant concerns about the September 2022 implementation timeline for Mathematics, English Language Arts and Literature, and Physical Education and Wellness.”

The Calgary Catholic School District (CCSD) trustees and administration continue to advocate for a full delay in curriculum implementation.

Rally organizers aren’t giving up hope and are encouraging parents to reach out to their MLA’s.

A spokesperson for the education minister said with the changes the government is following through on a commitment to deliver a modern curriculum while listening to feedback from Albertans.

“While these three subjects will be implemented in September 2022, it is not too late for Albertans to give their feedback. Further changes will be made to continue to strengthen the content prior to implementation in 2022,” spokesperson Nicole Sparrow said.

The government will seek advice from education and curriculum experts early in the new year to further revise subjects.

Changes to grades seven to 10 won’t happen until the K to 6 curriculum is confirmed.