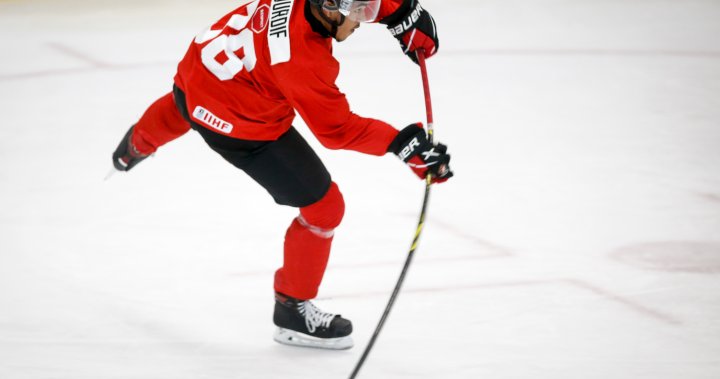 There are no plans yet to limit spectators at the world junior men’s hockey championship in Edmonton and Red Deer, Alta.

Ontario cut capacity at sports venues to 50 per cent and the Montreal Canadiens played in an empty Bell Centre on Thursday in an effort slow the spread of the COVID-19 virus.

“They’re monitoring closely what’s going on in other provinces. We’ve had conversations around what that could look like, but at this point, nothing more than that.

“There’s no plan right now to limit fans. We continue to move forward with the plan for full buildings.”

The 2021 world junior championship in Edmonton was held minus fans in Rogers Place because of the pandemic.

Active COVID cases in Alberta were spiking a year ago, with almost 16,000 in the province on the opening day of the tournament.

There were 4,212 active cases in Alberta as of Thursday.

Slightly over 90 per cent of tickets for the 2022 tournament have been sold, McIntosh said.

Hockey Canada is prepared if Alberta’s government suddenly demands a curtailing of attendance.

“The challenge is obviously knowing what that contingency might look like knowing you’ve got everything ranging from what the Montreal Canadiens did in Montreal to an empty building, to half-capacity in Ontario, to other derivations in between.

“All we can do is take direction, I think is our challenge.”

4:48
Cheer on Canada at the World Junior Ice Hockey Championships while also helping out a good cause

The teams arrived in Canada this week and were in quarantine on Friday.

Players and staff were required to produce two negative tests before departing for Canada and have been tested every day since their arrival, McIntosh said.

Those who test negative are cleared to hit the ice on Saturday.

Pre-tournament games are scheduled to start Sunday, including Canada versus Switzerland in Red Deer.