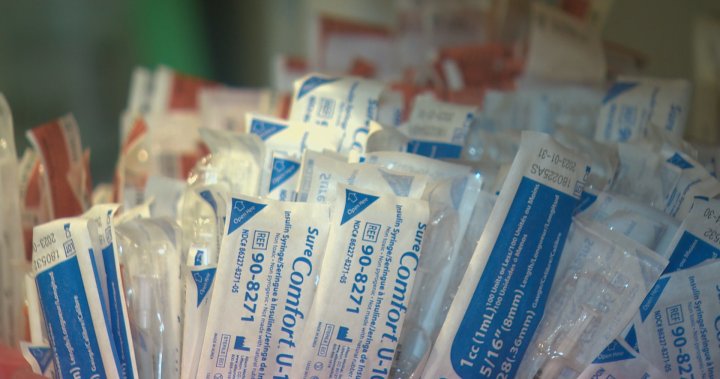 Ophelia Cara clicks play on an upbeat indie song before injecting a prescribed opioid into the vein of her arm in a tent at a downtown Calgary park.

She says the music gets her in the right headspace.

“Feels so good,” Cara says, before a tourniquet is removed from her arm and she wipes away blood from the crease of her elbow.

An anesthesiologist crouches nearby, ready to react in case Cara has an adverse reaction to the drug.

The pop-up overdose prevention site is the first of its kind in Calgary, said organizers, who passed out harm reduction supplies, warm drinks and food on Thursday in -35 C with wind chill.

Dr. Bonnie Larson, one of the health-care workers who is part of outreach efforts, said there are fears operating an unsanctioned drug-use site could land the groups involved in trouble, but she said it’s worth the risk.

Alberta is on track to record its deadliest year for overdose deaths. Between January and August, more than 1,000 people died.

“In the environment that we’re in right now, with skyrocketing overdose deaths, we need to be doing everything we possibly can to (protect) every single individual who is at risk,” said Larson.

A supervised consumption site for medical purposes must be granted an exemption by Health Canada under the Controlled Drugs and Substances Act to operate.

In Lethbridge, a person who ran a similar site to prevent overdose fatalities was ticketed 17 times for operating without a permit. The city bylaw tickets were dismissed by a provincial court judge.

The Calgary group is relying partially on the Good Samaritan Act, which protects well-intentioned bystanders from legal liability, Larson said.

The City of Calgary said it was aware of the initiative but was not an active partner. The Canadian Press has reached out to Emergency Medical Services and the Government of Alberta for comment.

Larson said there need to be more harm reduction measures, including supervised sites, across Alberta to address the overdose crisis, which is being made worse by an increasingly toxic drug supply, she said.

“The amount of services is not anywhere near what we actually need to catch up to this phenomenon.”

Cara, who helped plan the daylong initiative, said being both a harm reduction advocate and active drug user gives her a unique perspective to support the community.

“I kind of act as the glue between the two groups to help drug users trust activists and to help activists talk to drug users,” she said.

Cara said the temporary site signals “the community is behind them and they aren’t alone.”

It also provides another opportunity for people to use under supervision, she said, considering there are barriers to accessing the Beltline site due to its location, sometimes extended wait times and rules against inhalation.

“I don’t take most of my shots at the safe site because it’s so far away from me,” she said. “But if there were another one … more people could actually be reached.”

By day’s end Thursday, many people had used drugs under supervision in the tent, Larson said. There were no overdoses. She also spoke to visitors about detox and treatment options and how to administer naloxone to reverse an overdose.

Volunteers were on standby to respond to potential overdoses, said Boots on Ground, one of the groups involved. There was no overdose prevention tent.

Warming items, food and other supplies were distributed. So were nasal and intramuscular naloxone.

Petra Schulz, co-founder of Moms Stop The Harm, said the event was part of “War on Drugs Armistice Day” that highlights the need for more support and compassion for people who use drugs.

“We need immediate action on the drug poisoning crisis in all communities that is killing four Albertans every day. Almost everyone knows someone who lost a loved one,” said Schulz, who lost her son, Danny, to an accidental fentanyl overdose in 2014.

Schulz is critical of the province’s recovery-focused approach for people who use substances. She said there also needs to be more robust harm reduction supports.

“Many people who die are not ready, able or willing to enter treatment,” said Schulz. “But all deserve to live.”