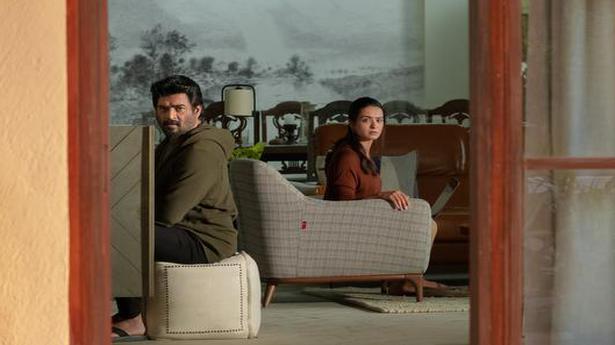 Even though the series starring R Madhavan and Surveen Chawla is about a couple’s separation, the governing consciousness is its creator’s. Which is why you are either going to love it or hate it

It is important that you be aware of the brand Manu Joseph has created from the reputation of an unsentimental writer, in order to relish the juicy bits of the eight-episode series, directed by Hardik Mehta.

Though Decoupled is about a “misanthropic” and equally provocative writer Aarya Iyer (R Madhavan) and his wife Shruti Sharma’s (Surveen Chawla) disintegrating marriage, the governing consciousness of the series is Joseph’s. It is therefore for this reason that the series will have two extreme reactions: either you are going to love it or hate it, much like his columns.

These are uncomfortable truths, as Joseph would argue. He will also convince you that there are positive outcomes of victimhood. All of which is to not say that Decoupled is not entertaining. Just that the manner in which each episode is constructed, without a common purpose, makes it look self-indulgent. To make matters worse, it has a writer in Aarya at the centre. Actually two, if you count Chetan Bhagat’s cameo and the fact that he is India’s “best-selling author”.

The inherent, arid humour attacking the system of thought is easily the best part of Decoupled. But Madhavan isn’t a better Manu Joseph protagonist than Joseph himself. He comes across as too rigid at times and doesn’t seem to embody the snarky attitude of his character; the dialogues do not help. They sound too bookish, making you feel this would have been more effective as an audio book. For example, in the first episode, a political economist says this: “Your book club treats male members as second class citizens, even though they are feminists.”

Take this too, for instance. When Aarya asks Shruti whom she is meeting, given that they are still “technically” married, she asks him to expand on the word. He tells her, “If you are dead under mysterious circumstances, I will be the prime suspect.” Somehow these two slyly brilliant lines do not produce the same effect when spoken out loud. It is the same case throughout the series where dialogues feel like they were written for a novel than for screen.

The main issue with Decoupled is how familiar it sounds to those who follow Joseph’s writing. You know he dismisses male feminists and economists. You know he thinks Parasite is a stupid film. You know his anger towards the elite of the system when it becomes an underclass of another system. All this baggage prevents the characters from come alive as individuals, instead they seem more like puppets — like when Aarya contemplates the purpose of barricades on Indian roads, or when he questions the role of CISF security in the airports.

Though the intention may have well been to make a comedy of errors at the forefront of which its primary characters Aarya and Shruti find themselves, learning a new thing or two about themselves, the series does not have a strong spine to hold it together in a cohesive manner. For the most part, there’s a claustrophobic feeling of being trapped inside Joseph’s head, and we are not sure if that is a good place to be.

Decoupled is currently streaming on Netflix.