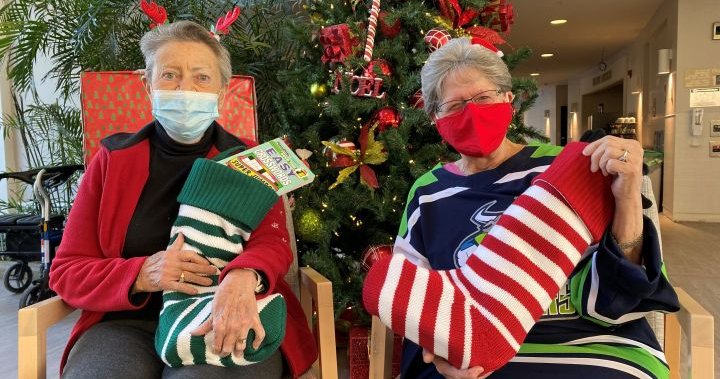 A lot of Calgary seniors are in for a nice surprise this Christmas, as some young hockey players provide an assist to the spirit of the season.

The Calgary Canucks of the Alberta Junior Hockey League are teaming up with Silvera for Seniors to help bring stockings full of small gifts for more than 1,400 Silvera residents in Calgary.

Seniors at Aspen Lodge have fond memories of 2020, when they awoke on Christmas morning to find stockings hanging on their doors.

Month of Giving: Kerby Centre keeping food on the table for vulnerable seniors this holiday season

“We were met with this tremendous surprise,” Aspen Lodge resident Sally Yamchuk said. “And for some more than others it was really important, because they didn’t have family.”

Silvera is collecting donations at several of its buildings, with more information on their website.

Silvera staff have some suggestions on which items to include in stockings.

“Socks or mittens: things that sometimes our residents can’t afford to get for themselves on limited and fixed incomes,” Silvera for Seniors CEO Arlene Adamson said.

The Canucks have been spreading the word on the stockings campaign with a video posted on social media.

Christmas is right around the corner and we want to spread some holiday cheer to our friends at @silveraforseniors.

Drop off your #StockingsforSeniors at at our home game on December 18th or at one of the Silvera drop-off locations in #yyc.
https://t.co/6swcMkpQSo pic.twitter.com/OtAGJguaeB

The team has also been putting out donation boxes at home games at Henry Viney Arena, with boxes out again on Saturday Dec. 18 as they take to the ice against the Canmore Eagles.

“COVID-19 is not completely over, but we can start helping out the community again and it’s just good at Christmastime to give back,” Canucks forward Matthew Brunton said.

Silvera officials said the support from the Canucks is important to the stockings effort.

“For the Canucks to step up in this way is great leadership,” Adamson said. “It’s also a great relationship, to have young people reaching out to the older generation and saying ‘You matter.’”

Calgary seniors team up with students to spring into planting season: ‘It’s wonderful!’

Residents at Silvera buildings say the hockey team’s support means a lot to them.