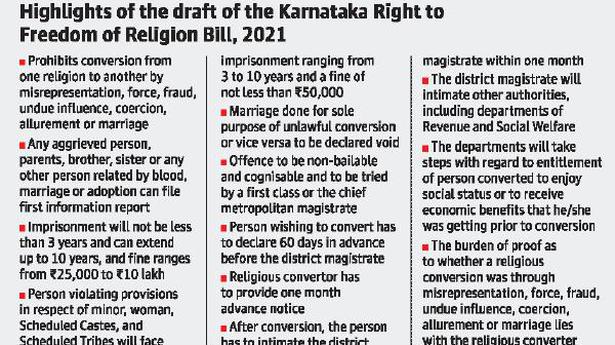 The proposed anti-conversion law, The Karnataka Right to Freedom of Religion Bill, 2021, that has stringent provisions for forced or induced conversion, is likely to come before the State Cabinet on Monday.

Government sources said the draft Bill is “almost ready”, and is likely to be discussed in the Cabinet before it is piloted in the Assembly later next week.

As per the draft of the Bill, forced conversion will be non-bailable and non-cognisable. It has some stringent provisions, including imprisonment for not less than three years and minimum fine of ₹25,000. The burden of proof as to whether conversion was by force lies with the religious converter.

The draft of the Bill says that the Law Commission of Karnataka, after studying various laws on the subject and considering the situation in the State in its 30th report, has made recommendation to the Government to enact a suitable law.

The statement of objects and reasons cites the 1977 judgment of the Supreme Court in Rev. Stanislaus vs. State of Madhya Pradesh and Orissa that said that the right to propagate religion under Article 25 does not include the right to convert another person. It said, “In recent times the State has noticed many instances of conversion by means of allurement, coercion, force, fraudulent means, and also mass conversion. These instances caused disturbance of public order in the State. To prevent such instances which cause disturbance to public order and to punish persons indulging in such acts no legislation is in existence in the State.”