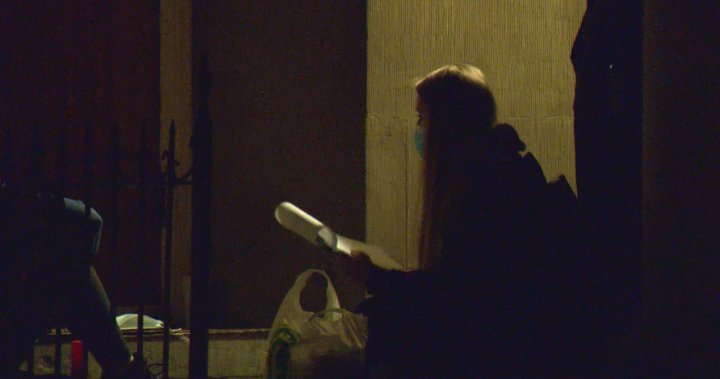 A recent preliminary report of a Point-In-Time (PiT) study is painting a stark picture of just the minimum amount of people facing homelessness in Regina, as the issue continues to be on the rise both in the city and across the country.

By conducting the study, community advocates are doing what they can to gain a better understanding of precisely how many individuals could be affected.

“They went out and basically asked anyone they say whether they would like to participate in a housing survey and through that mechanism and a couple of other data collection mechanisms, we found 488 individuals facing homelessness,” said Addison Docherty, Regina PiT count coordinator and executive director of Flow Community Projects.

“The PiT Count data validates what we’ve been hearing anecdotally for the past two years,” Docherty said.

“I have heard from nearly every community-based organization within the homeless serving sector that there has been a drastic increase in the number of people experiencing homelessness; more clients saying they have been staying on the street, and an increase in clients with greater depth of needs,” he said.

Around 130 volunteers were organized for this year’s PiT Count. Volunteers were given an area in the city and sent out to ask individuals to participate in an anonymous housing survey.

The Namerind Housing Corporation, which funded the survey, partnered with Flow Community Projects to work on the study. The fund comes from Regina’s Community Entity.

Regina volunteers help to determine extent of homelessness in the city

“If you think about homelessness like an iceberg, the point in time count only gives us what’s visible above the water,” Friedmann-Conrad stated.

“So, it’s just a snapshot of the people we were able to reach, during a specific day and during a specific time with the teams that were set up throughout the city … you know, to talk with people they observed as homeless,” Friedmann-Conrad added.

She goes on to say the staggering number of 488 individuals advocates counted is in no way representative of the total number of homeless people in the city and that the real number is expected to be higher.

As in previous counts, this number includes individuals sleeping rough (in unsheltered spaces) and those in shelters, public systems (detox), transitional housing and in hidden homeless spaces, such as those who may be couch surfing.

The two prior counts were completed in the spring, however the most recent one was done in late September because it had been pushed back because of COVID.

However, recent numbers show that both sheltered numbers and rough sleepers were higher in comparison to counts in the past.

“People in the community are seeing clients with a higher depth of needs that includes mental health, addictions, people with disabilities, things of that nature,” Docherty noted.

Friedmann-Conrad said that several communities across Canada that fall under the Reaching Home program have reported a slight increase in homelessness due to the COVID-19 outbreak, but that does not account for the kinds of numbers being recorded in Regina.

Although an emergency shelter with 40 beds was just set up by Regina Treaty Status Indian Services (RTSIS) and the City of Regina last month, RTSIS said it has been at capacity since members from Camp Hope at Pepsi Park were relocated to the temporary shelter space.

There are also reports of the other shelters in the city continuing to reach capacity on a regular basis.

Docherty and Friedmann-Conrad said they hope this year’s PiT Count data will help amplify the sense of urgency of which community-based organizations and volunteers have been sounding the alarm on for months, and in some cases even years, when it comes to stepping up leadership intervention.

“We’ve been able to ramp up services and add new programs, and yet, the overall number of people in homelessness has kept rising while it’s become increasingly more difficult to house and support clients,” Friedmann-Conrad explained.

When asked about the findings of this count, the Saskatchewan Ministry of Social Services said it will continue to listen and collaborate with community partners to address the issue of homelessness within the province.

“The Government of Saskatchewan values the work of the volunteers and community partners who participated in Point-in-Time Counts to determine the number of people experiencing homelessness in Regina,” read a statement from the ministry.

“The Ministry of Social Services offers support to people experiencing homelessness by connecting them to income and housing supports, while partner agencies and organizations support specific issues people may be experiencing, such as mental health or addictions issues,” the statement goes on to read.

“An example is our recent transfer of building ownership to All Nations Hope Network (ANHN) to support the organization in expanding services offered through its Awasiw program.

“We also recently announced changes to the Saskatchewan Income Support program to better support clients with more complex needs who may be at risk of being homeless, and who require more support to see success.”

The final report of this survey will be out in January and will include more data. Docherty adds that this information can be used as a tool to convey just how monumental of a problem homelessness is in the city.