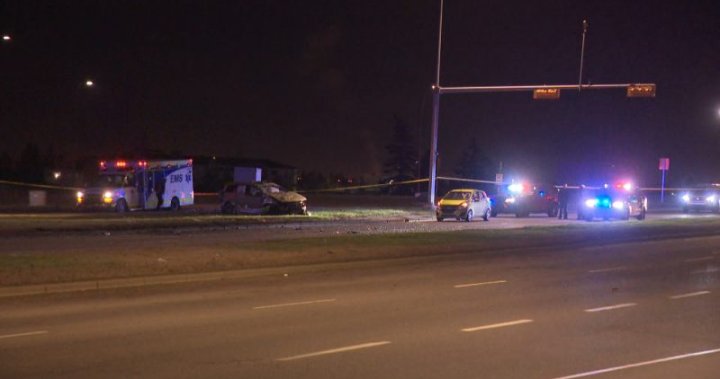 One of the two men charged in a May 2020 collision that killed 15-year-old Ibaad Yar and injured two other teenage boys pleaded guilty to manslaughter on Wednesday.

Defence lawyer Balfour Der confirmed that 37-year-old Udham Sandhu pleaded guilty to manslaughter and that the sentencing date would be set on Thursday.

A second man, 39-year-old Mahipal Rajput, was also charged with second-degree murder in connection to the Calgary crash.

According to an agreed statement of facts, the deadly collision happened at around 2:30 a.m. on May 13, following a high-speed chase that involved a pellet gun being shot and several other collisions between a Buick Allure and Dodge Journey.

2:01
Police searching for at least 2 suspects involved in fatal Calgary hit and run

Police searching for at least 2 suspects involved in fatal Calgary hit and run – May 13, 2020

Police said a Buick Allure hit a Dodge Journey from behind, causing it to cross over the centre median and roll. One of the teenage boys in the Dodge, Ibaad Yar, was ejected from the vehicle and pronounced dead at the scene.

Police said the Buick remained on scene for a short time before it was driven away. Later in the day, it was located unoccupied in the Saddleridge area.

On May 29, the driver of the Buick, Sandhu, was charged.

The agreed statement of facts details that on May 12, a group of youth, including Ibaad Yar, drove to the Sandhu house in the Dodge and threw a brick at the Buick, damaging the windshield.

Sandhu later told police the offenders “were coming back… They threatened to kill his family because his kid might have an ‘online beef’ with somebody.”

The two teenagers had made plans online to meet behind a school and “settle the dispute,” the agreed statement of facts explained.

According to those court documents, the two parties — the youths in the Dodge and Sandhu’s group in the Buick — were involved in a vehicle chase and several smaller collisions.