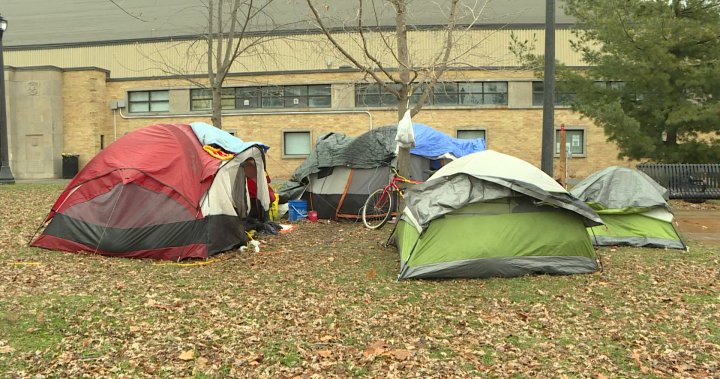 As the weather gets colder, the City of Kingston continues on track to provide more services to the unhoused, whether it’s the new warming centre or prepping at the Portsmouth Olympic Harbour site for the arrival of the first sleeping cabins.

“We do ramp up our services over the winter as you can imagine,” says Bruce Davis, housing and social services project manager for the City of Kingston.

Longtime supporters of the city’s most vulnerable are pleased to see services being spread out across the city for those who need them.

“There’s people who are experiencing homelessness all over the city,” says Chrystal Wilson, a local housing advocate.

Teresa Davidson is unhoused, and has come up with a system for getting herself and her belongings around.

“It’s a bit of a haul but I have a bicycle and buggy, and my dog pulls my bike and buggy so I have no problem getting around there,” she says.

Davidson says the harbour site and the tiny homes will definitely work out for some.

“We all have our own ways of living, right,” she says.

“And certain people don’t want to live the other way. The tiny homes are run differently than the harbour lights — I think people would find a way to get there if they needed to.”

As for the new warming centre, she hopes it will be a place she will be comfortable in.

“I’d have to have my own room,” says Davidson.

“A bed for sure, because the last warming centre they had no beds, everyone was on the floor, and I don’t think that’s healthy. As well as I’m an ex-addict, so I would have to have somewhere where I wouldn’t be around people that do drugs.”

The City of Kingston says decentralizing services is the way to go.

“It’s not a good strategy to have one location where you’re trying to serve everyone. That is not a good, healthy, sustainable strategy,” says Davis.

“It’s far, far better to have smaller-scale support in key locations where you have the support.”

As for the arrival of the Portmouth tiny houses, Wilson says the first three have been delayed until Friday.