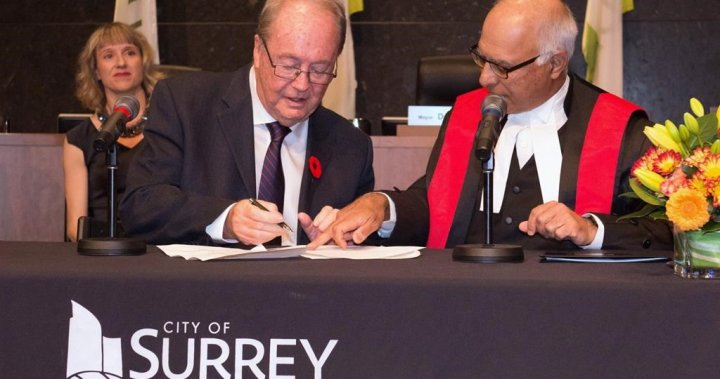 Taxpayers will foot the legal bill for Doug McCallum as he faces a public mischief charge related to claims he was hit by a car in September.

The City of Surrey confirmed by email on Monday it will pay for the mayor’s legal defence as per the terms of its indemnification bylaw.

McCallum has retained one of the priciest defence lawyers in Vancouver — Richard Peck, who also defended Huawei’s Meng Wanzhou from a United States extradition request.

“The city should not be paying his legal bills,” said Coun. Linda Annis on Monday.

“Doug admitted himself that he was out there on personal time doing shopping … If we’re doing personal business, the city should never be responsible for our legal bills.”

McCallum was charged on Dec. 10, after an investigation into his claims that someone ran over his foot at a Save-On-Foods parking lot during an altercation with opponents of the city’s police transition.

McCallum has declined to comment on the case as the matter is before the courts.

According to the Criminal Code of Canada, public mischief includes, “making a false statement that accuses some other person of having committed an offence.”

The City of Surrey’s indemnification bylaw allows some legal bills to be paid.

It states, however, that, “no fine shall be paid by the city that is imposed as a result of a Municipal Official’s conviction for an offence that is not a strict or absolute liability offence.”

Kyla Lee, lawyer at Acumen Law in Vancouver, said that does not appear to apply to an offence like public mischief — which is neither a strict, nor an absolute liability offence.

“Offences of strict liability and absolute liability do not have a mental fault element associated to them,” she explained, “but the offence of public mischief specifically indicates that a person must intend to mislead the police in making the complaint.”

If the indemnification clause is later found not to apply in McCallum’s public mischief case, she added, McCallum could be forced to repay the city for his legal fees.

1:14
Surrey mayor to continue role as chair of Police Board

Surrey mayor to continue role as chair of Police Board

The intention of the provision is to protect government officials who are working in their official capacity from personal liability, said Lee.

Annis and fellow Surrey Coun. Brenda Locke, however, have said McCallum was out shopping on personal time, and therefore not acting in his capacity as mayor when the alleged incident occurred.

“There is no indication he wasn’t doing anything other than personal business,” said Locke.

“I have great concerns with the fact that the city is paying — that the citizens, the taxpayers of this city are paying — for legal fees in this instance.”

No comment from Surrey mayor on RCMP mischief investigation

Locke said she is aware McCallum may have to reimburse the municipality if he is convicted of public mischief, but she’s never heard of an instance where that’s happened before.

“The challenge is, how do you get that to happen?” she asked. “From what I’ve found out, there is almost no instance where anyone has ever paid back the city for legal fees.”

In the aftermath of the public mischief charge against McCallum, calls for his resignation have grown.

The mayor may also face a code of conduct complaint from the group opposing the city’s transition away from the RCMP, and into the launch of its own municipal police service.

One man hospitalized after shooting outside Coquitlam, B.C. pub: RCMP – BC