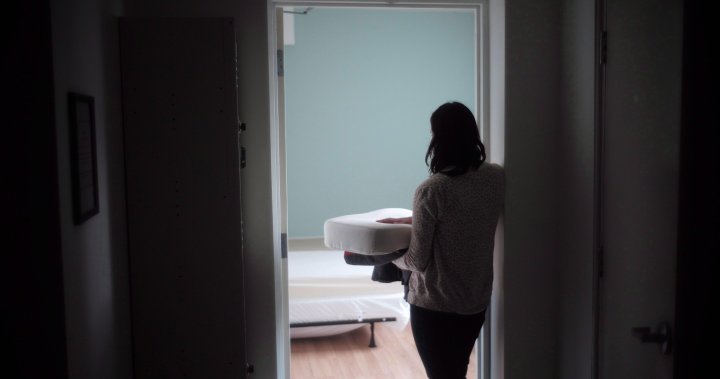 The Alberta Council of Women’s Shelters says even though calls for help have been down in the pandemic — due largely to a lack of shelter space — they still had to turn away nearly 19,000 women, children and seniors.

‘Do whatever you need to do’: Alberta woman who fled domestic abuse during COVID-19

ACWS executive director Jan Reimer says the risk to those individuals is great.

“An alarming 58 per cent of women who enter shelters are at severe or extreme risk of being killed by their current or former partner,” she explained.

That’s what makes it tough to tell people there’s no room at the inn, so to speak.

“Turnaways can happen for a number of reasons. One, the shelter simply doesn’t have enough space. Secondly, the shelter does have the space, but it’s not available due to public health restrictions,” Reimer said.

“Or finally, the shelter is unable to provide the services requested or needed by the caller.”

She said that could include things like mental health counselling and help with addictions or housing.

While the number of people being turned away has declined in the pandemic, Reimer cautions it’s not a sign the problem is going away.

Reimer explained that when pandemic messaging reminds people to stay home to stay safe, that isn’t the case for everyone, but she believes it has reduced inquiries.

“Women became fearful of their health and that of their children, they were less likely to reach out for support,” she said.

“But as things relaxed, we again saw those increases in demand, both for support calls and outreach.”

Reimer said you don’t need to be in a shelter to get assistance from one.

“If you need help, go and get it. It’s really important.”

She expressed concern about the aging infrastructure shelters are using, mentioning problems with leaking roofs and plumbing.

“They were built in the ’80s and ’90s. There isn’t really a lot of money ever given to shelters for ongoing maintenance.”

Global News is currently running a donation drive in support of women’s shelters in Alberta.