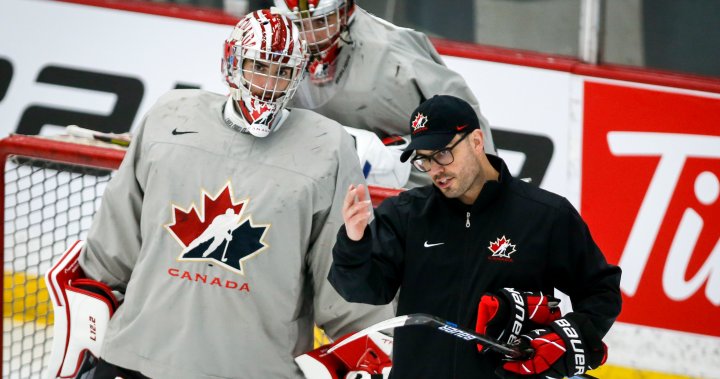 Olivier Michaud’s got some stories to tell the three goaltenders on the Canadian junior men’s hockey team.

Two decades after he tended Canada’s goal in the 2002 world under-20 hockey championship in Hradec Kralove and Pardubice, Czech Republic, he’s the goaltending coach of the 2022 edition.

“I remember pretty much everything,” Michaud told The Canadian Press. “Even if it was 20 years ago, it was my first and, until this year, my only world juniors.”

Not answering the phone in his hotel room during selection camp for fear he would be told he’d been cut from the team, beating out two other goaltenders to join Pascal Leclaire on the Canadian squad, warming up for the first game against France on Christmas Day in Hradec Kralove’s frigid arena, and Russia’s Alexander Svitov spitting on Canada’s Brian Sutherby during a round-robin game are among Michaud’s memories now more vivid because of his job on the current squad.

Michaud played round-robin games against Switzerland and Finland with Leclaire in net for Canada’s 5-4 loss to Russia in the gold-medal game in Pardubice.

The spitting incident became part of Canadian junior hockey lore as an example of a player putting his team before himself.

A livid Sutherby wanted to retaliate, but didn’t want penalties or his possible ejection to impact Canada’s fortunes in the tournament.

“He was good just taking a deep breath and calming down and thinking about the team first because, yeah, he was frustrated,” Michaud recalled.

“We were also at the same hotel as the Russians. I remember a couple chirps at the hotel.”

The undrafted Michaud from Beloeil, Que., started a game for the Montreal Canadiens in 2001-02 and went onto play minor pro. Now 38, Michaud works as a goalie coach for the QMJHL’s Drummondville Voltigeurs.

Michaud and Leclaire beat out Shane Bendera and Ray Emery for just two goaltending jobs on the Canadian team 20 years ago.

Unlike Michaud, Canada’s three goaltenders didn’t endure sleepless nights at selection camp wondering if they would be included on Canada’s team for the 2022 world junior tournament in Edmonton and Red Deer, Alta.

Dylan Garand felt the high and Brett Brochu the low of last year’s five-goalie competition at selection camp. Garand, Devon Levi and Taylor Gauthier were chosen and Brochu was released.

But when Garand, Brochu and Sebastian Cossa received their invitations this year, they were also informed they were on the team.

“I was really pumped to get that call,” Brochu said.

The trio stood apart among their peers, was Hockey Canada’s rationale for hand-picking them.

“I think it simplifies it and I think those three goalies separated themselves from the pack,” Canadian head coach Dave Cameron said.

Advances in technology since Michaud played gave Canada’s coaches and scouts the video and data analysis to make that determination.

“Every shot, every time they played the puck this year, I saw it,” Michaud said.

Garand, Brochu and Cossa had the luxury of time to work intensively with Michaud during selection camp.

“If it would have been four or five (goalies) it would have only been making sure they’re confident and comfortable,” the goalie coach said.

“It was still that, but I had a different angle for each of the guys to do. There’s some stuff I want to make sure we grow before we start the tournament, so it was starting those little details right now instead of starting them a week later.

“There’s starts and minutes to be earned. It’s not that they’re coming here on vacation. They’ve got to sync with the team.”

The Canadian team relocated to Banff, Alta., after the 25-man roster was announced Sunday.

The three goalies played in selection camp’s two exhibition games against a university side, but “because these goalies are picked and because I had so many other decisions to make, I didn’t pay a lot of attention to my goaltenders,” Cameron said.

The competition for starts in Edmonton heats up in pre-tournament games. Canada faces Switzerland on Sunday and Sweden on Monday in Red Deer followed by a Dec. 22 game in Edmonton against Russia.

Those games carry a lot of weight in determining who will be in Canada’s net to open the tournament Dec. 26 against the Czech Republic in Rogers Place.

Garand, a New York Rangers prospect, is a veteran of the squad that won a silver medal in the 2021 tournament in Edmonton, although Levi played the majority of minutes.

Garand’s game action was limited to giving up a goal on six shots in the third period of a 16-2 blowout of Germany in the opener.

The six-foot-one, 179-pound Kamloops Blazers netminder carried a 15-4-0-0 record, a goals-against average of 1.85, a save percentage of .932 and two WHL shutouts into selection camp.

“It was great for the three guys getting to come in knowing there’s not that much pressure on you,” Garand said. “I can speak for the three of us. We definitely appreciate it.

“It definitely made things better for us and it’s pretty cool to come in and know you’re going to be on the team and start getting to work.”

Cossa, a first-round draft pick of the Detroit Red Wings, also arrived with strong stats of a 15-3-2-1 record, a 2.26 goals-against, a .924 save percentage and two shutouts for the WHL’s Edmonton Oil Kings.