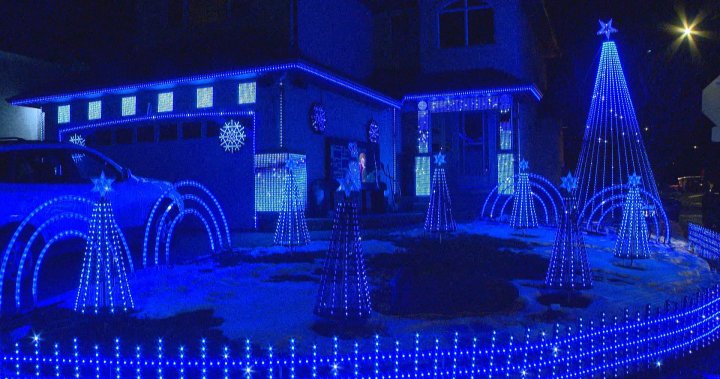 Trevor Allen and his family go above and beyond to bring some holiday joy to residents by putting on a one-of-a-kind annual light display, synchronized to music, at his Lakeridge home, located at 5140 General Drive.

He went on to say the light display costs him around $45 a month on his power bill. The lights and all of the hardware he uses have cost him a few thousand.

Allen adds he takes pride in knowing he’s put in a lot of effort and creativity into making it happen.

“I build everything myself, so I don’t buy pre-made built props,” he said.

Santa and Mrs. Claus makes a splash in North Battleford

“I’ve designed everything myself, so that’s what the uniqueness of my show is..then you’ve got time and labour and building materials and stuff like that,” Allen said.

When it comes to the lights themselves, Allen said he sources them and gets them for a really good deal, which allows him to save some money in the long run, but for him it’s not about the dollar value of it all, it’s about seeing a smile on people’s faces.

“It’s a lot of fun, you know, after a couple of months of working on it, every night, every day, it get’s tiring, but once I get the show up, and I watch..people, that’s why i do it, that brings it right back,” he said.

It’s also a year-long process, which requires an ample amount of dedication.

“I start prepping at the beginning of the year, by starting to select the songs I want to use throughout the year, and then start sequencing them, a song can take between three to four weeks to sequence and then I’m usually doing that over the spring and the summer,”  Allen said.

“Once August hits, I bring out all the props and start testing them and I start setting up kind of early September and testing all the pieces of it,” he added.

Allen also says it does get quite busy around his home towards the end of December with lots of traffic. Overall he’s been getting some good feedback not only from those who come to see the show but also from those who live nearby.

“I know there’s been a few neighbours that have been upset with people blocking driveways, but for the most part, the neighbours love it,” he said.

“They harass me about it and joke about how their lights are going to beat me this year and stuff like that, so the neighbours are actually pretty good about it, that’s awesome,” Allen said.

The display will be up until early January.