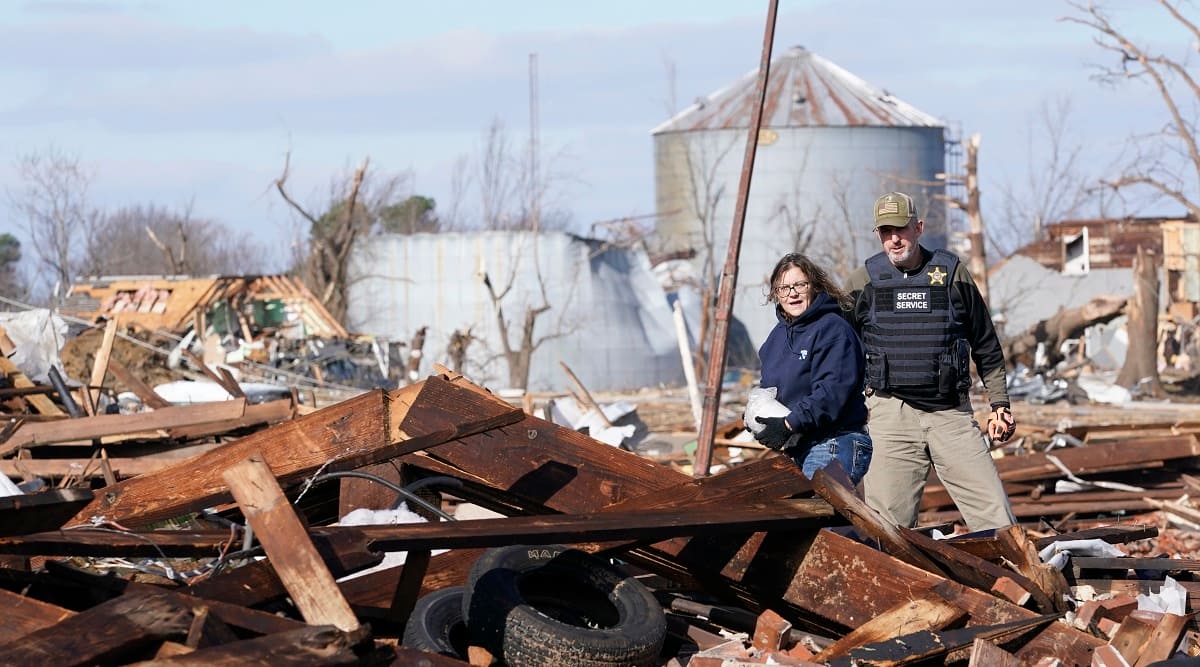 A monstrous tornado killed dozens of people in Kentucky and the toll was climbing Saturday after severe weather ripped through at least five states, leaving widespread devastation.

Kentucky Gov. Andy Beshear said upwards of 70 may have died when a twister touched down for more than 200 miles (320 kilometres) in his state but the number of deaths could exceed 100 across 10 or more counties. “This has been the most devastating tornado event in our state’s history,” Beshear said at a news conference.

The storms hit a candle factory in Kentucky, an Amazon facility in Illinois and a nursing home in Arkansas. Officials had confirmed 29 deaths, including 22 in three Kentucky counties. Beshear said about 110 people were in the Mayfield factory when the tornado roared through.

Debris from destroyed buildings and shredded trees covered the ground in Mayfield, a city of about 10,000 in western Kentucky. Twisted metal sheeting, downed power lines and wrecked vehicles lined the streets of what was barely recognizable as a town.

The missing at the candle factory included Denise Johnson Williams, a 50-year-old mother of four whose family members kept vigil at the site Saturday.

“It’s Christmastime and she works at a place that’s making candles for gifts,” her brother, Darryl Williams, said. “To give up the gift of life to make a gift. We haven’t heard anything, and I’m not presuming anything. But I’m expecting for the worst.”

He said Johnson Williams called her husband overnight to report the weather was getting bad, the last time anyone heard from her.

Kyanna Parsons-Perez, an employee at the factory, was trapped under 5 feet (about 1.5 meters) of debris for at least two hours until rescuers managed to free her.

In an interview with NBC’s ‘Today’, she said it was the “absolutely the most terrifying” event she had ever experienced. “I did not think I was going to make it at all”. Just before the tornado struck, the building’s lights flickered. She felt a gust of wind, her ears started “popping” and then, “Boom. Everything came down on us.” People started screaming, and she heard Hispanic workers praying in Spanish.

In this aerial photo, a collapsed factory is seen with workers searching for survivors in Mayfield. (AP)

Among those who helped rescue the trapped workers were inmates from the nearby Graves County Jail, she said. “They could have used that moment to try to run away or anything, but they did not. They were there, helping us,” she said.

Kentucky State Trooper Sarah Burgess said rescue crews were using heavy equipment to move rubble at the candle factory. Coroners were called to the scene and bodies were recovered, but she didn’t know how many. She said it could take a day and potentially longer to remove all of the rubble.

Rescue efforts were complicated because Mayfield’s main fire station and emergency services hub were also hit by the tornado, said Jeremy Creason, the city’s fire chief and EMS director. “We have been working tirelessly through the night,” he said. “We had to at times crawl over casualties to get to live victims to get them out.”

President Joe Biden tweeted Saturday that he was briefed on the situation and pledged the affected states would “have what they need as the search for survivors and damage assessments continue.”

At least one person died at an Amazon facility in Edwardsville, Illinois, Police Chief Mike Fillback told reporters Saturday morning. The roof of the building was ripped off and a wall about the length of a football field collapsed.

Two people at the facility were taken to hospitals in St. Louis, about 25 miles (40 kilometers) away, Fillback said. The chief said he did not know their medical conditions. About 30 people who were in the building were taken to the police station for evaluation.

Early Saturday, rescue crews were still sorting through the rubble. Fillback said the process could take several more hours. Cranes and backhoes were brought in to help move debris. “This is a devastating tragedy for our Amazon family and our focus is on supporting our employees and partners,” Amazon spokesperson Richard Rocha said in a written statement.

Firefighters wait for help to carry out a person who was found in a debris field injured when a tornado ripped a house off its foundation along Highway F at the intersection of Stub Road in St. Charles County. (AP)

Workers at a National Weather Service office had to take shelter as a tornado passed near their office in Weldon Spring, Missouri, about 30 miles (48 kilometres) west of St. Louis. One person died and two others were injured in building collapses near the towns of Defiance and New Melle, both just a few miles from the weather service office.

“This was an incredible storm that lasted a long time and covered a lot of territory,” said Larry Vannozzi, meteorologist in charge of the National Weather Service office covering the Nashville area.

Meteorologists haven’t determined whether the storm spawned a single tornado or multiple tornadoes, he said.

In Arkansas, a tornado struck a nursing home in Monette, killing one and trapping 20 people inside as the building collapsed, Craighead County Judge Marvin Day told The Associated Press. Five people had serious injuries, he said.

Another person died when the storm hit a Dollar General store in nearby Leachville, Gov. Asa Hutchinson said.
“Probably the most remarkable thing is that there’s not a greater loss of life,” Hutchinson said after touring the wreckage of the nursing home.

“It is catastrophic. It’s a total destruction.”

The storms swept through Bowling Green, Kentucky, near the Tennessee border, tearing roofs off homes and flinging debris into roadways. Western Kentucky University’s president said on Twitter that one of its students who lived off-campus was killed. The school called off commencement ceremonies that were planned for Saturday because the campus was without power.