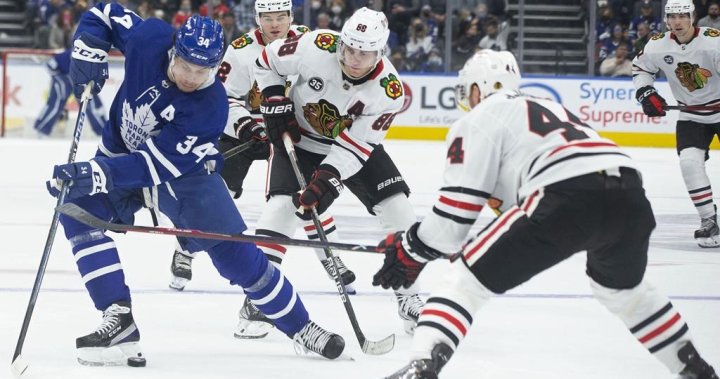 The first-year Maple Leafs forward took advantage of a lucky bounce off the end boards to score with 80 seconds remaining to allow his team to escape with a 5-4 win before 18,934 at Scotiabank Arena on Saturday.

This season Kampf has four goals, but two have been important ones against the Blackhawks. On Oct. 27, he scored the tying goal to allow the Maple Leafs to win 3-2 in overtime in Chicago.

“It doesn’t matter,” Kampf replied when asked if scoring against his old team was special. “It was a lucky bounce, and I had an open net.”

As Chicago goalie Kevin Lankinen went behind his net to stop Morgan Rielly’s shoot-in, the puck caromed to Kampf for an easy game-winner. Lankinen gave up five goals on 26 shots.

The Maple Leafs (19-8-2) blew a 4-1 lead they had built up early in the second period. But they fired only three shots on goal in the middle 20 minutes, and Chicago (10-15-2) cut into the lead near the end of the second period.

Then Dominik Kubalik scored early in the third, and Jake McCabe drifted a screen drive with 9:18 remaining in regulation time.

“I think we just lost track of our process, the way we want to play,” said William Nylander, who led the way offensively with a goal and two assists.

“I think we started to give pucks away and weren’t able to get pucks deep and play behind their goal line, which is what led to the game opening up like that.”

The fluky victory almost spoiled a successful return for backup goalie Petr Mrazek, who had been out since Oct. 30 with a groin injury.

But after giving up a goal from Chicago captain Jonathan Toews early in the game, Mrazek hunkered down to make 31 saves, including a breakaway stop on Patrick Kane midway through the third period. He attempted to beat Mrazek through his pads.

“You don’t have time to think about it,” Mrazek said of Kane’s breakaway. “I think I got a piece of it with my stick and then squeezed my pads.”

The Maple Leafs built a 3-1 lead after the first period after John Tavares and Auston Matthews sandwiched power-play goals around Nylander’s go-ahead marker on a nifty setup from Tavares.

Toronto improved its lead to 4-1 on a goal from fourth-line centre Pierre Engvall early in the second period. Rookie Alex Steeves picked up the second assist on the goal for his first career point in his third game.

But then the Blackhawks began their comeback. Chicago defenceman Connor Murphy scored on a wrist shot off Mrazek.

“It’s not always the way you draw it up,” Tavares said of the result. “(Mrazek) had a hell of a night, and we’ll put the two points on him.

“It’s hard to leave the rink feeling good about our game.”

The Maple Leafs have two wins in the five games since Mitch Marner was lost to a shoulder injury. Toronto allowed both opponents a chance after blowing big leads in the two wins against the Columbus Blue Jackets and Blackhawks.

“It’s the same story that it’s been here with just too many chances against,” Toronto head coach Sheldon Keefe said. “Too many freebies, too many guys behind us, same issues that were hurting us when we weren’t winning games early in the season.

“The fact that we won tonight is a good thing, fortunate to get a little bit of a bounce there, but to me, we won the game on special teams and goaltending, but got outplayed pretty badly at five-on-five.”

Meanwhile, Blackhawks interim head coach Derek King made his first appearance behind an NHL bench in Toronto. He scored 45 goals in 161 games for the Maple Leafs in the late 1990s.

The Hamilton, Ont., native also spent six seasons as an assistant coach with the AHL Toronto Marlies before moving to the Blackhawks organization.

This report by The Canadian Press was first published Dec. 11, 2021.