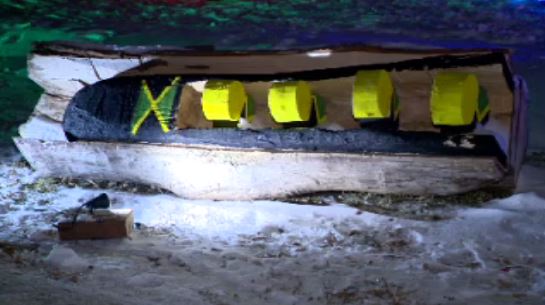 This is the third year that the display has taken place and according to Weyburn Tourism Executive Director, Larry Heggs, each consecutive year it gets bigger and more impressive.

The lights are a wonder to see for any and all ages but can especially catch the eye of the younger crowd.

“I just think that one of the most exciting things for children is all the bright coloured lights,” said parkgoer, Jewell Vanstone. “And this is just really spectacular and we can walk through if we want and the kids can get right up close,” she said.

The light displays include that of the Grinch, a carving of the Jamaican bobsled team from ‘Cool Runnings,’ and of course jolly old Saint Nick himself.

The common theme amongst everyone who attends was having a good time and enjoying themselves in the park.

“I spoke to one lady today, who said between her and her grand-daughter last winter, they probably went easily 50 times around the lights. So everybody enjoys them when they see them,” Heggs said.

Of course, every individual person’s favourite aspects of Christmas will differ but one young girl her had her own thoughts on the matter.

“Just hanging out with family and eating food,” she said, followed by a laugh.

A sentiment, that many might tend to agree with.