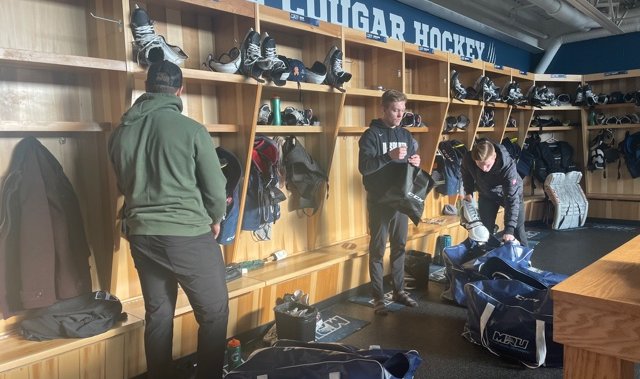 But this weekend, Yaremko and a group of Alberta’s top university hockey players will be giving a big assist to Hockey Canada’s National Junior Team Selection Camp.

The U SPORTS All-Stars will play a pair of games against the junior prospects to help Hockey Canada brass decide who will be named to their final roster — and hopefully challenge for gold in Edmonton.

“If I’m not a part of the team, playing against them is almost just as good,” Mount Royal Cougars forward Ryley Lindgren said.

Lindgren played in this event back in 2019 and watched Alexis Lafreniere, Dylan Cozens and the rest of Team Canada defeat Russia in the gold medal game.

Providing elite competition prior to the exhibition games is one of the biggest assists the student athletes can make for their fellow countrymen.

“That was one of the things they pointed out, just the whole experience in itself and getting to see those guys win gold after they played them.”

Make no mistake, the competition will be fierce.

The U SPORTS roster is made up of former WHL stars and Canada West’s top two scorers in Yaremko and his rookie MRU teammate Riley Sawchuk.

“It’ll be a cool experience because they have players like Jake Neighbours and Dylan Guenther that I was actually on a line with last year when I played in Edmonton,” Sawchuk noted. “I was talking with our assistant coach in Edmonton the other day, and he was telling me that he hopes I don’t end up passing them the puck thinking I’m on their line again.

“I think I’ll make it tough on them. Don’t want to make it easy for them to play against us.”

At the ripe age of 25, Lindgren highlights the generational divide between veteran student athletes and the youngest player at camp, 16-year-old Connor Bedard.

“We have some more experience and maybe a little bit more mature,” added Yaremko, who has 13 goals in 12 Canada West games. “I think it’s gonna be a little eye-opening to see how good he (Bedard) really is on the ice.

“I’m excited to kind of play against that level again.”

It’s not a 2020s sports story without mention of the COVID-19 impact.

This event is made even more special for the U SPORTS players because it was cancelled just days before the game in November 2020.

“It was definitely devastating and something that took a lot out of us,” Lindgren recalled.

“We worked really hard for three, four weeks leading up every single day for that moment and playing that game.”

Gagnon was originally slated to compete at the 2021 FISU Universiade in Lucerne, Switzerland

“A week before we were about to fly out, it got cancelled. Pretty bummed out about missing that, but, you know, that stuff is out of your control. You’ve got to accept it and move on.”

MRU Cougars head coach Bert Gilling will man the U SPORTS bench for the weekend slate.

He believes Canadian university hockey has reached a new calibre that should attract interest from NHL scouts on the hunt for organizational pieces for American Hockey League affiliates.

After all, he said, Stockton Heat forward Walker Duehr made it to the Calgary Flames organization as an undrafted college player.

Consider it a little extra ammunition for those who want to continue the dream after they earn their diplomas.

“They don’t sit there and say that we have to lose, right?” Gilling said. “They just want competition.

“U SPORTS has won a game in this event the last two or three series that they’ve played. I threw that out to our players and staff to say like, ‘OK, let’s keep that going.’”