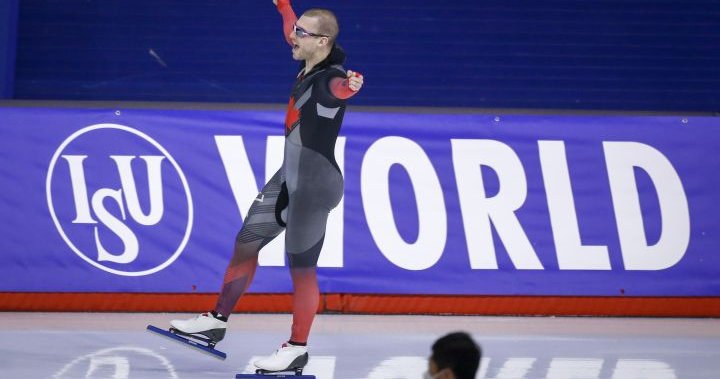 Dubreuil of Levis, Que., won gold in the men’s 500 metres in a track-record time of 33.77 seconds on the opening day of the ISU World Cup speedskating event at Calgary’s Olympic Oval.

“It was a goal of mine this year to both beat Jeremy Wotherspoon’s Canadian record and skate under 34,” said Dubreuil. “I was very close last week, 34.05, but I made a few mistakes, so to have another chance to do it this weekend was big.”

With Wotherspoon in attendance, Dubreuil beat what he referred to as a “mythical time.” After the race, the two talked about the record-setting accomplishment.

“He’s a competitor, but he told me he was happy that it was somebody he saw grow up skating and got better and (worked) hard to beat it,” said Dubreuil, who will now have to set his sights on breaking the world record of 33.61 set in 2019 by Russia’s Pavel Kulizhnikov.

“I told him how much it means for me.”

Dubreuil will have another shot to skate even faster on Sunday during the second 500m men’s race of the three-day event.

China’s Tingyu Gao won silver in a time of 33.87, while Japan’s Yuma Murakami captured bronze in 33.89. Both skated before Dubreuil as did Russia’s Viktor Mushtakov, who finished in 33.96.

“It’s difficult, but when you’re dialled in, when you’re on a good day and you feel great, skating is easy. It takes a lot of hard work for it to be easy, but today it felt easy because I was in the zone.”

Inspired by Dubreuil’s accomplishment, Ottawa’s Isabelle Weidemann set a personal best with a time of 3:55.33 to win silver in the women’s 3,000m.

“Oh my gosh, the girls and I were warming up on the track when he skated and we were mind blown,” said Weidemann, who has a chance to win another medal Saturday when she, Ottawa’s Ivanie Blondin and Valerie Maltais of Saguenay, Que. skate in the women’s team pursuit. “We knew that he was cooking up something good for a long time, but I don’t think anybody really expected him to go that fast.

“We were so hyped — just on the track vibing from his time. The team is really cool to be a part of right now. We’re just feeding off each other and using the excitement to fuel our own races.”

“I found something near the end of the race again and managed to finish really strong,” said Bloemen, who wasn’t happy with how he started. “I found a lot of confidence there. Unfortunately I couldn’t find that earlier.

“I’ve got more to come,” he added. “Last weekend I had a really bad race. This was so much better already. I’m really happy with the progression.”

Sweden’s Nils van der Poel, who has been dominating the World Cup circuit in the long-distance category, won gold in time of 6:04.29, while Italy’s Davide Ghiotto finished in a time of 6:09.34 to take home silver.

Earlier in the day, Russia’s Olga Fatkulina set a personal best time of 36.72 on her way to winning gold in the women’s 500m. Japan’s Nao Kodaira won silver in 36.81, while Russia’s Angelina Golikova earned bronze in 36.82.

The Canadian contingent at the event includes 16 men and 11 women and it’s the last chance for the skaters to pre-qualify for the 2022 Olympic Winter Games in Beijing, China.