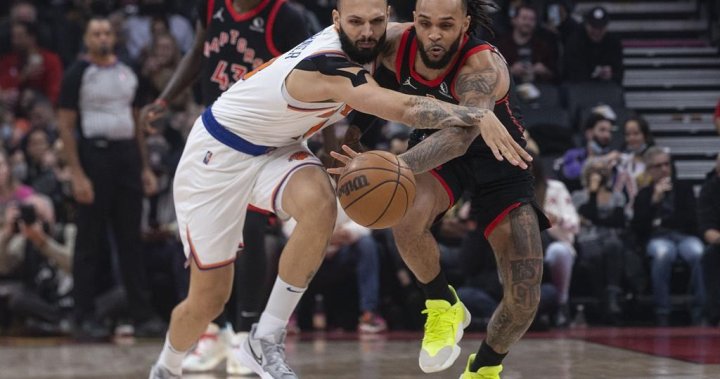 TORONTO – On a night that wasn’t particularly pretty for the Toronto Raptors, the frantic final minute was all about sheer will on defence.

And that had Fred VanVleet smiling.

Gary Trent Jr., poured in 24 points, including a key three-pointer with just over a minute to play, and the Raptors held on for a 90-87 victory over New York on Friday, their 12th consecutive victory against the Knicks in Toronto.

“I’ll take it,” laughed VanVleet, who’d been angry at his team’s effort in a one-point loss to Oklahoma City two nights earlier.

“Wasn’t a perfect game by any stretch, but I think some of us understand the offence is going to be an ‘adventure’ — that’s what Nick (Raptors coach Nurse ) and I like to call it,” he added. “But defensively man, we really fought and scrapped and I thought that we just deserved to win tonight.”

VanVleet had 17 points and 11 assists, while rookie Scottie Barnes had a career-high 15 rebounds to go with 12 points for the undermanned Raptors (12-14) who beat the Knicks for the 12th consecutive time in Toronto. Pascal Siakam had 13 points on a rough 3-for-18 shooting night, but hauled down 12 boards, while Chris Boucher chipped in with 14 points.

Canadian RJ Barrett, who according to broadcasters had 1,000 passes for family and friends to the game, and Obi Toppin led the Knicks (12-14) with 19 points apiece.

On the Knicks’ final few possessions, the Raptors made “double and triple the amount of stops we needed, we couldn’t get the ball,” VanVleet said — on one play, the ball bounced off his foot and out of bounds.

“All types of stuff going on, but we just kept making play after play.”

The Raptors amassed a 20 point-lead in the first quarter on Friday and appeared headed for an easy victory.

But the Knicks — who started the day in 11th in the Eastern Conference, one spot ahead of Toronto — had other plans. The Raptors led 69-65 to start the fourth quarter, but Toppin’s three-pointer tied it up four minutes into the frame to groans from the Scotiabank Arena crowd.

VanVleet brought them to their feet with a three-pointer for a five-point lead with 4:29 to play, then Siakam fed a slashing Barnes for a dunk to make it six points with about three minutes to play.

Barrett had five points of a 7-0 Knicks run that put the visitors up by a point, but Trent connected from long distance for an 89-87 advantage with 1:11 to play.

“Coach has been harping on defence,” Trent said. “We’ve been working at it, we’ve been getting after it. Every day when we come in, we’re putting the pieces together, slowly but surely figuring it out.”

Nurse had been similarly angry after Wednesday’s loss, but was pleased with his team’s hustle on Friday.

“Just the loose balls and offensive rebounds and stuff are a good sign,” he said. “We really needed to play with that kind of (energy). Well, we have to, we have to win the 50/50 balls and we’ve to get on the glass to get some extra possessions, and I thought we did that all night coming up with loose balls, a lot of deflections, it seemed like. Tipped a lot of passes, made a lot of passes not quite on target because of our high hands and things like that.”

The Raptors were outrebounded 55-48, but forced the Knicks into 15 turnovers.

The Raptors got off to a hot start, hitting five-three pointers in the first quarter, including one by Trent, that put gave them a 20-point lead. Toronto led 34-14 to start the second.

The Knicks’ bench scored 20 points in the second to fuel a 29-9 New York run, and when Immanuel Quickley drained a three-pointer to tie the game, players on the Knicks bench leapt to their feet in celebration. The Raptors closed the quarter with an 11-3 run punctuated by a Siakam dunk with a half second on the clock, and Toronto went into the halftime break up 50-42.

Barrett had nine points in the third quarter, including five straight that put the Knicks up by a point.

The 21-year-old from Mississauga, Ont., is rounding into form after missing a couple of games earlier this month due to a non-COVID illness that Knicks coach Tom Thibodeau said took a toll on the No. 3 pick in the 2019 draft. Barrett missed one game and had to leave another after just eight minutes.

The Raptors continue to battle injuries. OG Anunoby missed his 11th game with a hip injury, while Khem Birch sat for the seventh straight game with knee swelling, and Precious Achiuwa was also sidelined (shoulder tendinitis).

The Raptors also had a COVID-19 scare. The team cancelled practice on Thursday out of an “abundance of caution” after team president and vice-chairman Masai Ujiri tested positive for COVID-19. Ujiri, who is fully vaccinated including a booster shot, said it was later learned that there were positive tests at his Giants of Africa event on Sunday.

“Superfan” Nav Bhatia missed his first Raptors home game, ending a 26-year streak. Bhatia attended Ujiri’s Giants of Africa event, and so is in isolation in accordance with a Toronto Public Health order.

The Raptors were hit hard by the pandemic last March while playing in Tampa, Fla. Missing numerous key players, they tumbled down the Eastern Conference and missed the playoffs.

The Raptors host the Sacramento Kings on Monday in their final game of a season-long seven-game homestand.

This report by The Canadian Press was first published Dec. 20, 2021.