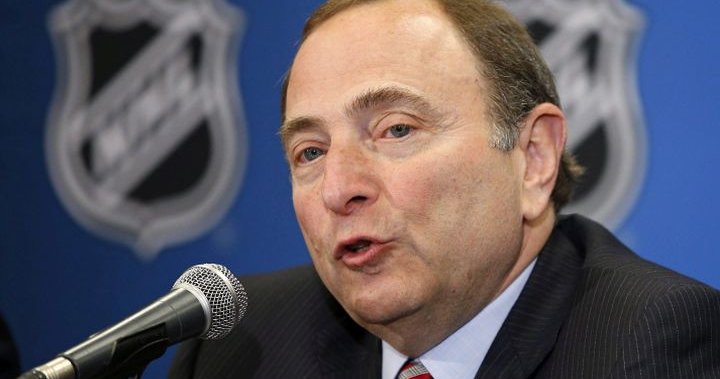 The NHL is putting the Olympic question squarely in the players’ court.

If hockey’s best want to participate at the Beijing Games — and COVID-19 doesn’t meaningfully disrupt the league’s schedule — commissioner Gary Bettman will give his blessing.

With less than 60 days until the opening ceremony, however, big concerns remain.

Speaking at the conclusion of the board of governors meeting Friday, Bettman said the league will continue to honour its commitment to allow players the opportunity to compete for gold in February.

But there’s still no have clarity on what happens if an NHLer tests positive for COVID-19 in China, including the length of a potential quarantine and if the individual will be allowed to leave the country during that period.

“We made a promise,” Bettman said during a news conference at the swanky Eau Palm Beach Resort & Spa following the board’s first face-to-face meeting since 2019.

“It’s not like we haven’t expressed our concerns. But in the final analysis, subject to some caveats, with all of the issues that are being raised, the players, for the most part, seem to continue to be saying they want to go.”

The league made that Olympic promise to the NHL Players’ Association when the extension to the current collective bargaining agreement was signed ahead of pandemic-delayed 2019-20 season’s resumption. The two parties then inked a deal with the International Ice Hockey Federation on the Games in September.

“Our concerns have only been magnified,” Bettman said of going to Beijing. “But ultimately, we made a commitment.”

“We have concerns, and we’ve expressed those to the players’ association,” Bettman added.

“We’ve seen that a number of players are now expressing concerns. We’ll have to see how this ultimately plays out.”

Deputy commissioner Bill Daly clarified the league could pull out of the Olympics at any point because of COVID-19, but Jan. 10 is the deadline to nix the plan without financial penalty.

He added the Beijing Organizing Committee was supposed to release an updated version of the athlete playbook last week — it’s expected to include procedures for positive COVID-19 tests — but that document has still yet to be delivered.

Asked what would happen if the playbook indicates a three-week mandatory quarantine be served in China, Bettman responded: “I actually find it difficult to believe that a player would want to go, understanding he was risking being in China for an extra three weeks.”

Daly then added of that potential scenario: “I don’t anticipate being on a different page with the players’ association.”

Bettman was also queried about issues apart from the coronavirus, including heightened political tensions between China and the West, the situation involving tennis player Peng Shuai, human rights abuses and allegations of genocide.

“We have real concerns on a whole host of issues, ultimately, this is going to have to be a players’ decision, unless we jointly agree with the (NHLPA) to the contrary,” Bettman said. “For all the reasons (provided), I am concerned.

READ MORE: Davis’ inclusivity efforts get thumbs up from NHL’s board of governors

The NHL went to every Olympics from 1998 through 2014 before declining to send its players to the 2018 Games in South Korea.

Owners have always been lukewarm on the showcase even under perfect health and safety conditions for a number of reasons, including the disruption to the league calendar.

“I don’t think that this is going to be the ideal Olympic experience in terms of the lockdowns in the Olympic Village and everything else that’s going on,” Bettman said. “But again, we made a promise to the players, and I’m going, to the best of our ability, adhere to it, understanding that there may be consequences that nobody’s gonna like.

“But we made a promise.”

The other big topic Friday was the evolving, seemingly endless Arizona Coyotes situation.

The City of Glendale informed the team this week it intends to lock the club out of Gila River Arena by Dec. 20 if all outstanding debts to the city and the building’s management company were not paid.

Glendale’s city manager sent a letter to the Coyotes informing the organization owed US$1.3 million, including $250,000 to the city.

“There’s no issue with the Arizona Coyotes,” Bettman said. “It’s clear that the City of Glendale has either an agenda or an edge in the way they’re dealing with the Coyotes. I think there was a miscommunication.

“All of the outstanding obligations had been brought current.”

The Coyotes have been leasing Gila River Arena on an annual basis since the Glendale City Council voted to opt out of a long-term deal in 2016. The city announced last week it will not renew its agreement with the franchise beyond the 2021-22 season.

The team has submitted a bid for a tract of land in Tempe — another Phoenix suburb — in what could be its first step in landing a permanent home. Bettman, meanwhile, said there are venue options for the Coyotes next season if their current Gila River Arena remains off the table.

“The new arena would be in a place where I think everybody would find it much more accessible and would improve the short-term and long-term fortunes of the club,” Bettman said. “It’ll take a couple of years to build, and the fact that the City of Glendale wouldn’t want the club to remain in their building on an interim basis speaks volumes about the way they’re approaching this.

“The Coyotes aren’t going anywhere. They’re going somewhere else other than Glendale, but they’re not leaving the greater Phoenix area.”

Bettman said the salary cap, which has remained stagnant at $81.5 million during the pandemic, will rise by $1 million next season.

Bettman said the so-called “flat-cap era” is slated to continue through to the end of 2023-24 campaign when all the escrow due to the owners as part of the rejigged CBA is expected to paid back by the players.

“Our projections in that regard are holding pretty well,” Bettman said. “The system is working as it was both intended and projected.”

Asked if his future was raised in front of the board, the commissioner tried to pour water on any talk of his retirement or ouster.

He was subsequently pressed on whether or not a contract extension has been signed — his current deal is set to expire after this season — but declined to answer.

“I never discuss my personal situation,” Bettman said. “I’m going to be here for a while.”