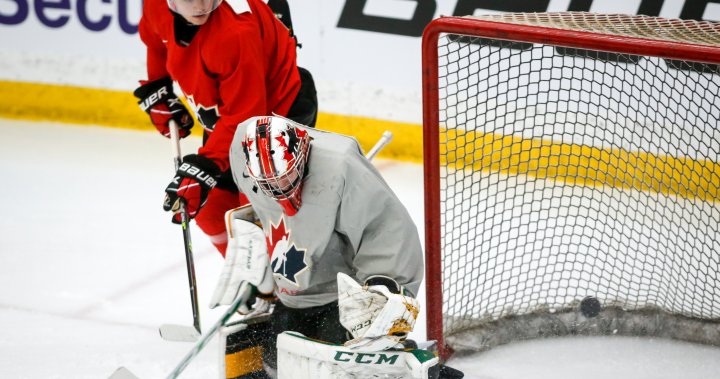 Selection camp for the Canadian junior men’s hockey team opened Thursday minus four players, including one who will not participate in the upcoming world under-20 championship.

Defenceman Jack Thompson of the Sudbury Wolves was among 35 players initially invited to Calgary, but was disinvited because of “COVID-19 protocols,” according to Hockey Canada.

The Wolves suspended team activities Nov. 30 because of a dozen positive tests for the COVID-19 virus within the organization. Sudbury won’t resume Ontario Hockey League games until Dec. 16.

University of Michigan forward Kent Johnson’s arrival was delayed because of COVID-19 issues as well. He will join the Canadian team for pre-competition camp next week.

“We expect Kent to join us during our pre-competition camp in Banff and we do expect Kent to be part of our national junior team moving forward,” said Scott Salmond, Hockey Canada’s senior vice-president of hockey operations.

“Unfortunately for Jack, he will not be joining us at camp due to our protocol. He will not be part of our selection process, nor our junior team.

“The conversation with Jack and his professionalism was incredible. He wished the team well. He was very understanding. Certainly shared his disappointment. The way he handled the news was exceptional and very professional.”

Hockey Canada needed both Thompson of Courtice, Ont., and Johnson of Port Moody, B.C., to quarantine for 14 days before joining the team.

“Both players we spoke about need to fulfil those quarantine requirements and further to that, it becomes a hockey decision,” Salmond said.

“We felt Jack needed to be at camp in order to make this team. At the same time, we felt Kent Johnson was a lock for our group.”

McTavish awaited the results of a COVID test and Cormier’s flight to Calgary was delayed. Both players were expected on the ice Friday.

Black hockey player says racism at the rink should be dealt with immediately, like other penalties

Canada opens the 10-country world junior men’s tournament in Edmonton and Red Deer, Alta., on Dec. 26 against the Czech Republic at Rogers Place. The medal games are Jan. 5 there.

Canada’s 25-player roster will be unveiled Monday. The team then heads to Banff before facing Switzerland in a pre-tournament game Dec. 19 in Red Deer.

Mac’s Tournament returns with changes in 2021

Canada will also play exhibition games Dec. 20 against Sweden in Red Deer and Dec. 22 against Russia in Edmonton.

Canada’s three goalies are already chosen, but Brett Brochu of the London Knights, Sebastian Cossa of the Edmonton Oil Kings and Dylan Garand of the Kamloops Blazers will compete for starts during camp and in pre-tournament games.

Garand, Manitoba Moose forward Cole Perfetti and Oil Kings defenceman Kaiden Guhle played for the Canadian squad that fell 2-0 to the United States in the 2021 gold-medal game in Edmonton.

The 2022 selection camp roster features players with experience at a higher level than major junior or college, but no player has come directly from the NHL yet.

The NHL door remains open until Dec. 15 for players such as Cole Sillinger of the Columbus Blue Jackets and Seth Jarvis of the Carolina Hurricanes to be released to the Canadian team, Salmond said.

Perfetti and defencemen Ryan O’Rourke and Donovan Sebrango bring a total of 160 games of AHL experience.

That’s a byproduct of the OHL cancelling its entire season in 2020-21 because of the pandemic, plus an agreement between major junior hockey and the NHL to allow teenagers who played a lot of games in the AHL to return to that league instead of their junior clubs this season.

“The more experience you can get at all different levels, the better for the team,” said Perfetti, who has played 49 AHL games for the Moose this calendar year.

“Playing against men for the last year has been great for me. The only way to get better is to experience the next level. The speed, the size, the physicality, the skill, everything is just another level.

“To be forced to play like that as a 19-year-old, not a lot of kids get to do that and get that opportunity.”

Perfetti, McTavish and forward Hendrix Lapierre have appeared in a combined 17 NHL games between them with the Winnipeg Jets, Anaheim Ducks and Washington Capitals respectively.

“The AHL and professional exposure that this team has and a lot of these guys have been exposed to, it’s going to be really helpful,” Perfetti said.