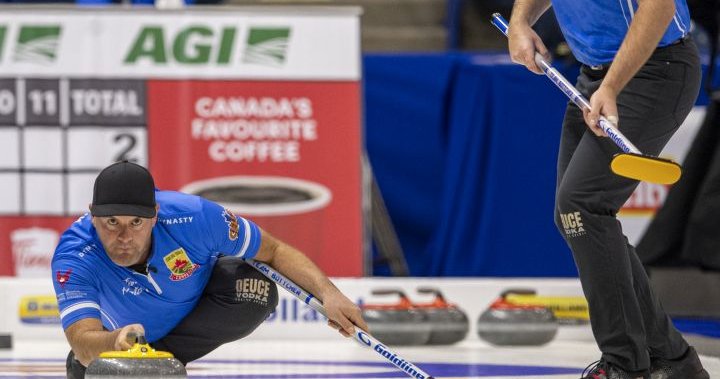 Curling free agent Darren Moulding has had “some discussions” about potential plans for this season since his departure from Team Bottcher and said he’ll take some time before making a decision.

Moulding was let go by the reigning national men’s champions on Friday evening, less than a week after the team missed the playoffs at Canada’s Olympic curling trials.

The wording of a team statement announcing the move was hotly disputed by Moulding, kicking off an extended news cycle over the weekend as perceived causes of the split were aired separately by the veteran third and skip Brendan Bottcher.

5:35
Team Bottcher is setting its sights on the World Men’s Curling Championship

“I think it’s important for myself for the whole thing to settle first,” Moulding told The Canadian Press on Thursday. “So for me, I’m listening and communicating but I won’t be making any decisions until the New Year.”

Team Bottcher changed the statement on Sunday. References to Moulding taking time away from the sport and departing for personal reasons were removed.

The mid-season lineup change was a big surprise considering the team is preparing to defend its Tim Hortons Brier title. Bottcher’s Edmonton-based side will be Team Canada at the March 4-13 competition in Lethbridge, Alta.

Moulding won’t be wearing the Maple Leaf at the Enmax Centre but still hopes to compete at the event.

“I am hopeful for sure to be in the Brier in Lethbridge as a player and I’m exploring ways to do that,” he said from Lacombe, Alta.

Moulding said he was pleased the team changed its statement and reiterated that he was proud of their accomplishments over the last four-plus seasons. While he stood by his comments, he added that he wished everything was handled “a little bit cleaner.”

“What we threw ourselves into was completely unnecessary,” he said.

The high-profile split was one of the top online sports stories in Canada from Friday night through Monday afternoon. Bottcher, who appeared on a Curling Canada conference call on Sunday, did not immediately name a new third.

Lead Karrick Martin, second Brad Thiessen and coach Don Bartlett declined to speak publicly on the team developments, the federation said, instead choosing to reserve comment until a replacement is named.

St. John’s skip Brad Gushue hasn’t ruled out playing in the Newfoundland and Labrador men’s tankard next month on the eve of the Beijing Olympics.

Gushue, who won Olympic gold in 2006, won last month’s trials in Saskatoon for the right to represent Canada at the Winter Games, which start Feb. 4.

His team would book a spot in the 2022 Brier by winning the Jan. 24-30 competition at the Re/Max Centre in his hometown.

Gushue said in a text message that the team plans to make a decision near the start of a five-day training camp scheduled to begin Dec. 16. The NLCA has given the rink until the end of its camp to decide, he added.

Jennifer Jones will skip Canada’s women’s team at the Games. The mixed doubles team will be determined at the Dec. 28-Jan. 2 trials in Portage la Prairie, Man.

Team Rachel Homan has entered a last-chance qualifier for the Ontario championship, needing to earn one of the three remaining spots in order to have a chance at wearing provincial colours again at the Scotties Tournament of Hearts.

A Dec. 17-19 double-knockout open qualifier in Guelph, Ont., will be used to fill out the eight-team provincial field.

Homan, a three-time national champion, made the final at the last two Scotties but lost to Kerri Einarson both times.

The Ontario Curling Association used to provide automatic entry for a reigning provincial champion if that team won the national title, but that was dropped at the request of the players about five years ago, CurlON executive director Stephen Chenier said in an email.

The association implemented a Canadian team ranking system model over three years ago, he said, but that qualification process was changed this season due to the pandemic and travel issues.

Homan could have qualified for provincial playdowns at last month’s trials but Jacqueline Harrison, a pre-trials entry, earned the spot by finishing ahead of her in the standings.

Teams could also qualify via earnings from three major Ontario-based events this season, but Homan did not enter any of those competitions or a cashspiel qualifier earlier this month.

Provincial playdowns are scheduled for Jan. 5-9 in Thornhill, Ont. The winner will represent Ontario at the Jan. 28-Feb. 6 Scotties in Thunder Bay, Ont.

The World Curling Federation has cancelled the 2022 world mixed doubles qualification event as a result of evolving travel restrictions due to the COVID-19 pandemic.

The Jan. 4-9 open-entry competition in Angus, Scotland was intended to qualify four additional teams for next year’s world championship. The WCF said its competitions and rules commission will now review the qualification process.

Canada has already qualified for the April 23-30 event.