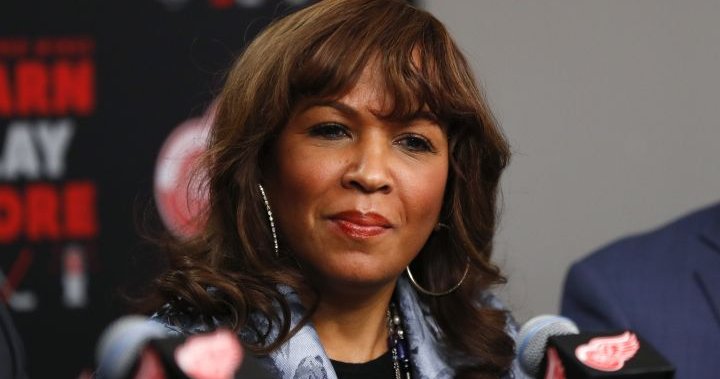 Kim Davis knows the long list of challenges and issues the NHL has faced over the last two seasons.

The reckoning has been real.

The league’s executive vice-president of social impact, growth initiatives and legislative affairs, Davis got a thumbs up from the board of governors Thursday on her office’s efforts regarding safety, inclusivity and respect.

“We all understand that there is a need, both as a business and as a moral imperative, to accelerate our efforts,” she told reporters at a press conference following her presentation to the board.

“That’s what this program and initiative is about.”

“Sheldon has been an amazing partner thus far in this journey,” Davis said.

Kennedy, who suited up for parts of eight NHL seasons, has been a leading voice for sexual abuse victims following his own experience being abused by then-coach Graham James for five years during his time as a junior hockey player.

“It’s going to take all of us pulling on the rope together to achieve our goals,” Kennedy tweeted Thursday. “Thank you (Kyle Beach) and others for your voice. I am confident the NHL will take a leadership role for the WHOLE hockey ecosystem.”

The 52-year-old isn’t at the board’s first face-to-face meeting since 2019, but Davis said his organization will be tasked with creating a 90-minute training program for all league and club employees.

She added Kennedy told her he’s impressed with what the NHL has been working towards.

“It is fascinating to have a conversation with someone who has been a practitioner in the area that I’ve been a practitioner in for 40 years,” Davis said at the posh Eau Palm Beach Resort & Spa. “For him to listen to the work that we have already had in place, and for him to say, ‘My goodness, who knew you guys have been working on an amazing platform?’

The league has faced some tough questions over the last two years on the sport’s culture, including the recent revelations surrounding the Blackhawks.

A third-party investigation by an independent law firm found a group of team leaders met to discuss Beach’s allegations on May 23, 2010, in the hours after Chicago advanced to the Stanley Cup final for the first time in 19 years.

The firm’s report said there was no evidence anything was done about the accusations after the meeting until then-team president John McDonough contacted the Blackhawks’ director of human resources on June 14 once Chicago had won the title — a delay that violated the organization’s sexual harassment policy.

“We are sorry that it happened,” NHL commissioner Gary Bettman reiterated Thursday before adding: “We have used this point in time as an opportunity to look at where we are and what we can do better.”

The hope is the four pillars outlined will be adopted by the NHL Players’ Association and a number of other leagues and organizations.

Davis, who added the league is set to partner with hiring startup Jopwell in hopes of building a more diverse workforce, said her priority at this time is prevention.

“It is important for us to go back and really establish a uniform baseline of understanding around the common issues of what we’re talking about when we refer to respect,” she explained. “So there is no ambiguity about what we mean and what we stand for.

“That baseline will then form the launching pad for us to be able to then continue to build on all of the practices.”

Davis also knows the work will probably never be complete.

“Change efforts are never ending because the world is constantly changing,” she said. “What we have to do is to be prepared to constantly iterate, to constantly pivot, to operate in ambiguity and despite what’s happening to continue to move forward.

“The most important part of this is being realistic about the efforts that are necessary to make the change, and to ensure that those efforts aren’t performative.”

Reporters had plenty of questions regarding the Olympics and the Arizona Coyotes’ outstanding debts with the City of Glendale, which has threatened to lock the club out of Gila River Arena later this month if its debts aren’t settled, but Bettman indicated those topics will be discussed Friday.

“There’s no problem,” the commissioner said of the Coyotes. “But we’ll deal with that tomorrow.”

Deputy commissioner Bill Daly provided an update on the impact of COVID-19, revealing in the post-meeting media availability that 19 of the league’s 32 teams have been forced to use “enhanced measures” at different points — in short, returning to last season’s protocols — due to positive cases.

The Ottawa Senators saw three games postponed because of an outbreak, while the New York Islanders had two shelved.

Daly said any enhancing protocols this season would be up to the league and NHLPA’s medical experts.

The board voted unanimously to approve Fenway Sports Group’s purchase of a controlling interest in the Pittsburgh Penguins.

Financial details of the sale have not been released, but sports business website Sportico valued the Penguins at US$845 million last month.

Penguins great Mario Lemieux and co-owner Ron Burkle will remain part of the franchise’s ownership group as part of the deal.

FSG, which owns Major League Baseball’s Boston Red Sox and Liverpool of the English Premier League, had been looking to add another major sports franchise to its portfolio.

“They see a great future for us,” Bettman said. “That’s why they’re making the investment.”