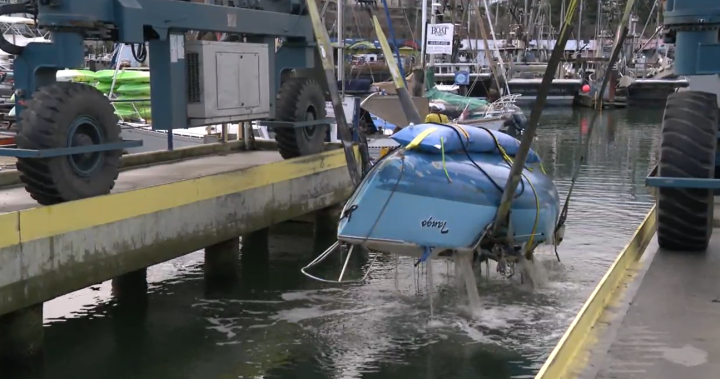 While the grounded barge on Vancouver’s Sunset Beach has attracted plenty of headlines in recent weeks, in nearby False Creek there are dozens of smaller derelict vessels that have drawn far less attention.

Jurisdiction of the waterway is shared between the provincial and federal governments, the City of Vancouver and the city’s park board.

It’s not clear how many of the vessels in False Creek are abandoned and how many are operating as liveaboards that skirt the city’s permitting rules.

Under city bylaws, boaters can get a two or three week free permit, depending on the season. But some members of the False Creek boat community allege bylaw violators are taking advantage of lax enforcement to stay longer, dump waste or anchor in the prohibited “navigable channel” of the creek.

In fact, In October, the False Creek Rowing Club was forced to cancel its regatta due to vessels clogging the navigable channel.

“Our regatta last year … we were the first event to get cancelled due to COVID, so not very proud of that but happy we did it, and now we’re having to cancel it a second time,” club president Simon Litherland said.

“This time it’s for matter in our control — well, not our control, but the city’s control — and it’s frustrating for people who didn’t have an opportunity this season to go for a row.”

Some area residents believe the situation on the water reflects the situation on Vancouver’s streets, where homelessness has surged in recent years amid a growing housing crisis and COVID-19.

Of the 76 people identified in Metro Vancouver’s 2020 homeless count who were living in vehicles, six said they lived aboard a boat.

“It’s a parallel thing that’s going on with the housing situation in Vancouver — people just can’t afford to live here so they’re trying to come up with creative ways, but it seems like there’s only a certain point where that works. At some point, everyone can’t be living on the water or living on the streets.”

The proliferation of derelict vessels also reflects a another problem: the high cost of safely disposing of old boats.

Under the Canada Marine Act, the Port of Vancouver can take action to remove vessels that pose an environmental or navigational safety risk, but generally they remain the responsibility of owners.

“It could easily be 10 to 20 grand to get rid of a boat responsibly,” Jonathan Paetkau with Skookum Yacht Services said.

“The real problem of course is that no boat owner is going to do that willingly if they can turn around and sell it for two or three grand.”

If people are living aboard the boats, Transport Canada says it’s up to the City of Vancouver to manage the issue through its permit system.

The City of Vancouver declined an interview request on the matter Thursday.

John Roe, director of the Dead Boat Disposal Society, told Global News the issue was partly a result of complicated bureaucracy across multiple levels of government.

“We just need to be able to shorten up that timeline between what is a derelict boat and how fast is it going to get out of the water, that’s where the whole problem stems right now,” he said.

“It can take us six months to a year for us to process a boat to get the right to seizure.”

Roe said he wants a made-in-B.C. body focused specifically on derelict vessel and docks that can cut through the red tape and move quickly to address the boats, and their potential environmental impacts.