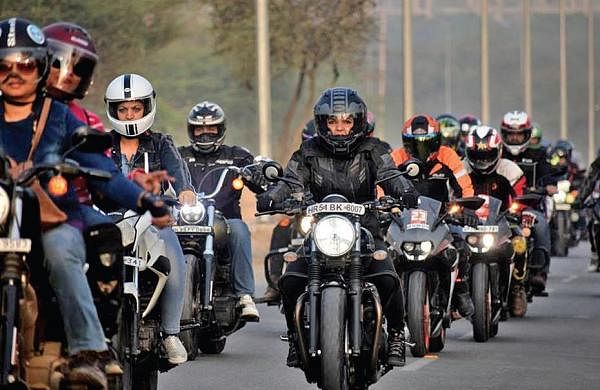 NEW DELHI: We grow up hearing ‘you cannot do this’ or ‘this is not feminine’. There are always people telling us what to do, and stopping us from doing things we actually can do,” says Shabnam Akram (57). To debunk similar stereotypes, Akram started the Delhi chapter of The Bikerni—India’s first and largest all-women motorcycle club founded by Urvashi Patole and Firdaus Shaikh in 2011, with 17 chapters across the country—in 2012. A group encompassing diverse backgrounds and age-groups, members of The Bikerni are the embodiment of the new-age woman who is not afraid to pursue her dreams.

Akram, who has been a motorcyclist since she was 27, says, “Once you start riding motorcycles, you realise that when you ride, you are one with it. It is so much fun, you stop wondering log kya kahenge [what will people say].” Another member of the Delhi Bikerni, Krishna Singh (45) enjoys the company of like-minded people who are part of the club. “The Bikerni is a platform for women to explore themselves. When we ride, we feel bold,” she shares.

Conceptualised as a safe space for women riders, The Bikerni was launched as a rebellion against naysayers who claim that handling motorcycles is a “man’s job”. “We wanted to create a space where women could ride together and have fun,” says Patole (33).

Being the first of its kind in India, this club and its members have faced more than their fair share of challenges. “We get catcalled quite a bit,” explains Patole, who has been riding motorcycles since the age of 14. Akram, who has also dealt with judgment from passers-by, says, “There are people who believe that if you are a female rider, you are ‘free’ and you will do whatever they want, when you are just a person riding a bike. Men riding bikes are not judged the same way. This happens in every field; men have a tendency to suggest that you owe them something, when you do not.”

Since its formation, the club, which now has over 40 members in Delhi and over 2,000 across India, has been a driving force in changing people’s attitudes towards women riders and their capabilities. “Things have changed in the last ten years. People now know that it is not the gender, but capabilities and skills that define a rider,” mentions Patole.

Though the club has not been able to organise any events since the onset of the pandemic, Akram is hopeful that they will be able to get back on track soon. “Winter rides do happen, so hopefully we should be coming up with something soon,” she concludes.

Dubai Expo 2020 – Virtual Tour of the Pavilions with Thomas Cook