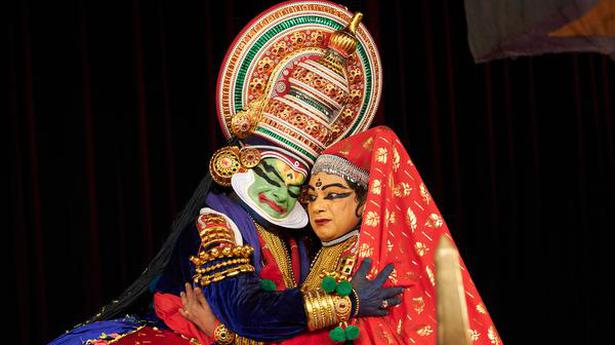 Man-woman love and its vicissitudes came alive on two consecutive evenings at ‘Bhava Bhavanam Anubhavam’, Kalakshetra’s three-day Kathakali festival. While one story was conceived three centuries ago, the other is barely three years old.

The inaugural show featured ‘Nalacharitam’, penned by Unnayi Variyar (1674-1754). The popular classic has strengthened its presentation structure down the ages, yet it largely sticks to conventional aesthetics, as reiterated by the maestros at the festival.

Unnayi’s magnum opus climaxes in the reunion of the focal couple: King Nala and Damayanti. Unusual poignancy defines Nalam Divasam, which essays this part of the Mahabharata sub-story. Sadanam Krishnankutty donned the protagonist’s role with the characteristic vibrancy that belies his age (80). With body movements reiterating his basic adherence to the dense Kalluvazhi school, the eclectic actor conveyed the travails of Bahuka (Nala in snake-bitten disguise) in the run-up to meeting his wife in a terribly awkward situation — as charioteer to a king who is keen to wed Damayanti after her husband’s desertion.

Kalamandalam Rajasekharan performed the heroine’s role, emoting with streaks of realism integral to the Kaplingadan style of his native Travancore region. A retired principal of his alma mater, Rajasekharan’s hand gestures bear a straightened-out quality, adding to their clarity. Young Kalamandalam Adithyan, with poise beyond his experience, jelled well in his interactions as palace maid Kesini.

Kottakkal Madhu and Sadanam Sivadas showcased the latest trends in Kathakali vocals. Chenda percussionist Kalamandalam Unnikrishnan and his brother, Kottakkal Ravi (maddalam), complemented each other with ease (even as the online video cruelly edged them out of frame). Greenroom chief Kalamandalam Sudheeshkumar did a fine job.

‘Soorpanakhangam,’ which is Harikumar’s 17th Kathakali work, is the art-form’s first-ever adaptation from Kamba Ramayana. The 12th-century Tamil work has its share of deviations from the Valmiki epic. Hence Harikumar’s play has Sambhukumaran coming in as the son of Soorpanakha, the sister of Lanka king Ravana. The youngster’s penance in the forest gets disturbed at the unexpected sight of Sita with her husband Rama and brother-in-law Lakshmana — all three banished from their kingdom.

The verses where Sambhukumaran initially wonders about the identity of the new faces has the character (by Sadanam Manikandan) on stage dancing iratti-s, hitherto untried in Kathakali’s medium-tempo songs set to 14-beat adanta. Earlier, the opening scene begins with a novel Pravesam (entry) of Rama (Sadanam Vipin Chandran) and Sita (Kalamandalam Arunraj) along with Lakshmana (Sadanam Akshay). Equally refreshing is the nine-minute choreography of the siblings’ subsequent making of the hermitage — something that is a traditional piece (Parnashalankam) in the ancient Koodiyattam. The fight between Lakshman and Sambhukumaran, too, weaves in innovative details.

Soorpanakha’s arrival in the woods to meet her son leads the demoness to fall in love with Rama. He rejects her proposal and suggests that she try her luck with Lakshmana, only to be snubbed again. What’s more, Lakshmana, on learning her identity, shows Soorpanakha the ornaments of the late Sambhukumaran. The playwright has given the demoness a make-up and costume that are remarkably different from any Kathakali character.

A theatrical technique called Dandakam fast-forwards the plot to where Soorpanakha meets Rama after he kills Ravana in the Lanka war. Still in no mood to accept her, the lord is cursed to be burdened with too many wives in his next birth (as Krishna). ‘You will be one (spiritually),’ says Rama, referring to the hunchbacked Kubja of Mathura.

Jyothish Babu and Vignesh Harikumar sang in ways that added to the melodrama. Sadanam Akademi’s Ramakrishnan, Jithin, Devadas and Jayaraj were the percussionists, while Kalanilayam Rajeevan did the facial chutti work.

The writer is a keen follower of Kerala’s performing arts.