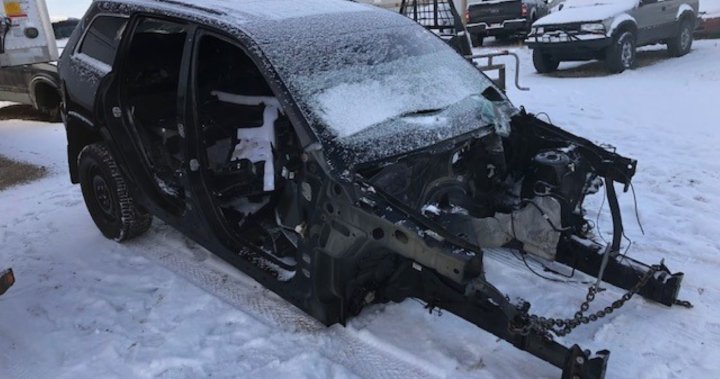 More than a dozen vehicles reported stolen from areas across the province were recovered after RCMP dismantled a chop shop in southern Alberta earlier this month.

On Dec. 2, the Calgary Police Service notified the southern Alberta crime reduction unit of the RCMP about the possible location of stolen Toyota 4Runner in rural Chestermere, RCMP said in a news release Thursday morning.

RCMP members went to a property in Rocky View County on Range Road 285 near Highway 1, east of Calgary. When they arrived, they said they saw items on the property that led them to believe it was being used as a chop shop.

A search warrant was executed, during which time RCMP located eight stolen pickup trucks, two stolen SUVs, a Cat Skid Steer, a flat deck utility trailer with skid steer attachments, a small utility trailer, an Artic Cat side by side and a Honda quad.

In all, the following vehicles were recovered:

Two of the vehicles had been “chopped,” according to RCMP, and are not able to be repaired. One pickup truck had its VIN changed and replaced with false VIN stickers for a matching vehicle.

RCMP said the other seven vehicles were in excellent conditions. Two of the vehicles had been stolen during test drives from Calgary dealerships.

RCMP said Thursday that charges have not yet been laid. The investigation is ongoing, with members of the CPS auto theft team, southern Alberta crime reduction unit and the RCMP auto theft unit working together.