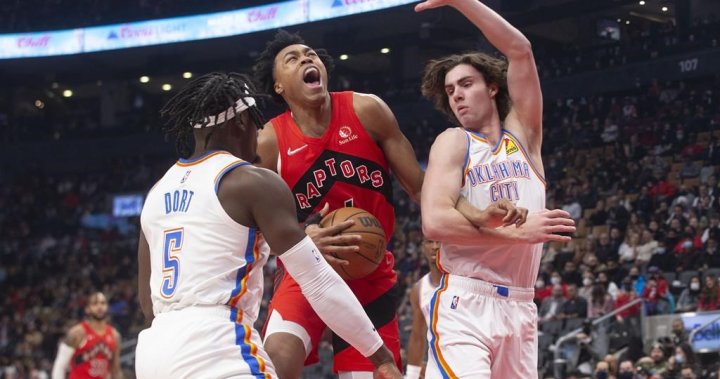 TORONTO – Justin Champagnie tipped the ball in the basket then barrelled up the floor, his Toronto teammates in hot pursuit to celebrate what they thought was the winning basket to end a thrilling game.

But joy turned to disappointment for Champagnie and the Raptors on Wednesday as video replay showed the ball hadn’t left his hand before the buzzer sounded.

“It kind of hurt,” said Champagnie. “It really did hurt. I thought I had it.”

Instead, Canadians Shai Gilgeous-Alexander and Luguentz Dort played spoiler for Raptors fans, leading the Oklahoma City Thunder to a 110-109 victory.

Gilgeous-Alexander, from Hamilton, had 16 of his 26 points in a pivotal third quarter, while Montreal’s Dort scored 22 points and was a brick wall on defence.

Gilgeous-Alexander, who said he feeds off playing in Canada, calling the atmosphere “electric,” showed incredible poise on what turned out to be the game-winning basket, a three-pointer by Mike Muscala with 8.9 to play. With the Scotiabank Arena crowd roaring, the Canadian passed out of traffic to find the open Muscala.

“He just continues to show really good balance,” said Thunder coach Mark Daigneault. “I’ve been really impressed with his restraint and his ability to play the long game. He’s home in Canada and he’s got the ball in his hands, down by two, and he makes the right play. He doesn’t get thirsty and try to force anything up there.”

The Raptors led by 13 points in the second quarter, but their offence came to a standstill in the third. The Raptors could only muster 12 points in the quarter, while the Thunder ended the frame with a 25-3 run for an 87-76 lead to start the fourth.

“It was kind of indicative of us just kind of being in second gear all night,” Raptors coach Nick Nurse said. “I thought we just weren’t ready to move and run, we weren’t pushing the ball hard.”

When Derrick Favors scored off a Raptors turnover early in the fourth quarter to put the visitors up by 13 points, a smattering of boos could be heard from the capacity crowd of 19,800 at Scotiabank Arena.

The Raptors clawed back to within six points on consecutive three-pointers from VanVleet. Then Siakam, Trent and VanVleet connected on back-to-back-to-back threes to tie the game with 59 seconds to play, bringing the fans out of their seats.

Champagnie muscled to the hoop for a basket with 18 seconds to play for a two-point lead, thumping his chest in celebration. But Muscala’s three, then Champagnie’s discounted basket sealed the victory for the Thunder.

Champagnie is on a two-way deal and has seen far more playing time with the team’s G League affiliate Raptors 905, averaging just 3.8 minutes with the NBA squad. Asked why Nurse went with the 20-year-old in the dying minutes, the coach said: “I didn’t like any of the other guys.

“I thought the other guys were soft, and unenergetic and not playing their role, they’re suppose to come off the bench and provide energy and they weren’t getting any stops, weren’t getting any rebounds, were fumbling balls around so I went to Justin.”

VanVleet was similarly angry at this team’s performance.

“It seems to be our pattern: play well, play really bad, get yelled at, play really hard, do it all over again.”

“We’re professionals, it shouldn’t take (yelling). You’ve got to show up to work and do your job everyday. It’s not about box score stats, it’s not about scoring, it’s not about awards, it’s not about individual accolades or individual plays, it’s about winning ball games and doing things the right and we just can’t seem to sustain that long enough to win against teams we must think we’re better than.”

Injuries continue to plague the Raptors. OG Anunoby missed his 10th game with a hip injury, while Khem Birch missed his sixth straight game and 10th this season with knee swelling. Coach Nick Nurse said the two will be sidelined for “the forseeable future.”

Siakam was a perfect 4-for-4 for nine points in the first quarter. The Raptors shot 68.2 per cent in the frame and VanVleet hit a three-pointer with 4.1 seconds left on the clock for a 36-26 lead to start the second.

Trent poured in 12 points in a second quarter that saw the Raptors go up by 13 on a three-pointer by Yuta Watanabe with 1:03 to play. The Raptors went into the halftime break leading 64-54.

Gilgeous-Alexander and Dort had combined for 58 points in the Thunder’s 114-103 win at Detroit on Monday that halted their eight-game losing skid. That win came one game after Oklahoma City was throttled 152-79 by Memphis, the largest margin of victory in NBA history.

Daigneault was hoping for big nights from his two Canadian players. They delivered.

“They have a lot of pride in where they’re from,” Daigneault said. “I’m just happy for them that they get to come home. . . I think it’s pretty cool any time a player can play close to home, but being from this country I think it has that added layer.”

The Raptors host another Canadian in RJ Barrett and the New York Knicks on Friday. They close out the season-long seven-game homestand Monday against Sacramento.

This report by The Canadian Press was first published Dec. 8, 2021.