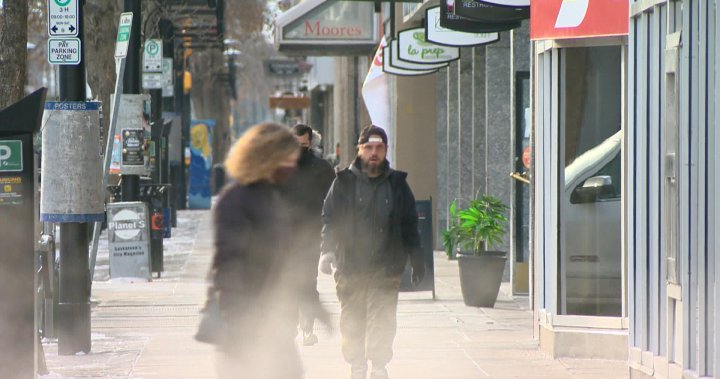 It’s finally feeling like winter in the prairies, and after a mild fall, the province has been hit with a cold snap.

But this weather rollercoaster is just getting started.

Saskatchewan has been spoiled this season, with relatively warm temperatures according to Environment and Climate Change Canada.

‘Not getting on a plane any time soon’: Deportation decision delayed in Humboldt Broncos case

But for many living on the Prairies, the cold was much-anticipated.

“I kind of like it, actually,” said Neil Dyck as he walked his dog, Sadie. “It feels so fresh. With the snow things get quieter, sound dampens a bit.”

Adam Fulawka said he noticed November and early December was warmer than past years in Saskatoon.

“I bike, like, year round and I’m like fighting slush and stuff and its not spring. This is very strange for me,” he said.

“It was going to come anyway, it was too warm for too long,” said Jamie Fabel.

The cold isn’t that unexpected, according to Environment and Climate Change Canada.

“This cold outbreak we’re having right now (is) very typical for this time of year, and just something we haven’t seen quite yet so maybe we just weren’t ready for it,” said Terri Lang.

She said the province is seeing a continuation of the heat waves this summer.

“It’s been so warm up in the Arctic that the Arctic waters haven’t frozen over yet, which is quite unusual, and that can wreak havoc on a lot of weather patterns as well.”

“A normal fall outside would maybe not be a lights-and-sirens response, but in weather conditions like this they would be, especially if they’re seniors,” said Troy Davies.

“Anytime you see open skin and you’re outside for a long period of time, that is going to have an effect. You’re at risk to have maybe some minor to moderate to even severe frostbite.”

With windchills and dropping temperatures over the next couple days, the city’s most vulnerable are at risk.

Shelters said the city’s homelessness crisis is getting worse. The Lighthouse, and other shelters, have been forced to turn people away.

“It’s getting colder and people having to stay outside, I don’t want to see people freezing to death and stuff but our resources are just so limited right now,” said support worker Leona Brockhoff.

The city’s cold-weather strategy is in place to open up warming locations. After this week, the rest of December is expected to be relatively warm, according to Environment and Climate Change Canada.