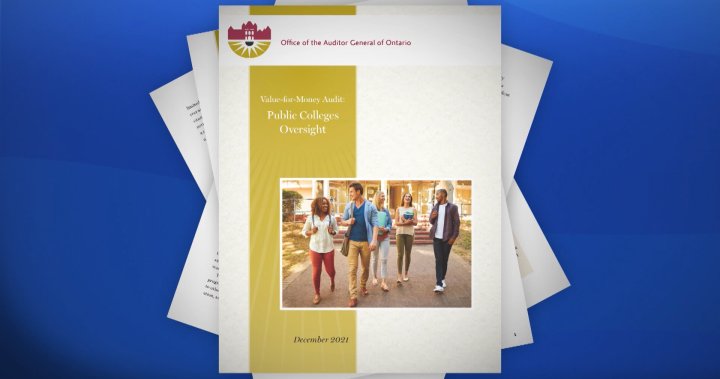 According to a new report from the auditor general of Ontario, the province’s colleges are becoming increasingly dependent on international student fees for financial stability.

The report that was released last Wednesday calls the funding formula “risky.”

“Such a high percentage, 68 per cent of the tuition fee from international students,” says Auditor General Bonnie Lysyk.

“If the borders are closed, if there’s a country where there’s an issue that Canada has and they stop sending their students or allowing their students to come, then the financial viability of some of the colleges in Ontario comes into question.”

Lysyk warns that the Ministry of Colleges and Universities doesn’t have a safety net for schools if, and when, there is a sudden decline in international students.

President and CEO of Loyalist College, Ann Marie Vaughan, says that 38 per cent of Loyalist’s students are international and nine out of 10 of them are travelling from India.

“It brings with it a measure of risk, and the pandemic is a great example of that,” says Vaughan. “As we see borders close, or changes in the patterns for students to be able to get here, that obviously impacts and adds an element of risk to our planning.”

At St. Lawrence College, the pandemic meant that the percentage of international students attending the school dropped from roughly 25 per cent to 17 per cent.

However, increasing the number of international students has become a long-term goal of the school, in its effort to become world-renowned and diverse.

“You know, I think the AG’s report indicated the exponential growth that’s been taking place in terms of international students,” says St. Lawrence College president and CEO Glenn Vollebregt. “Not only in Ontario, but across the country.

“So this is something that has happened in pretty much every college and every university across the country.”

Vaughan believes that more stability in the funding that colleges receive from the province would help ensure that programs can remain available to the community.

“I think the auditor general’s report shone a light on what we’ve known,” Vaughan says. “An overall under-funding of the college system in the province. And what’s happening then is that students’ fees are now starting to outpace government grants.”

The auditor general also notes in the report that Ontario provides the lowest amount of funding for full-time domestic students out of all Canadian provinces.