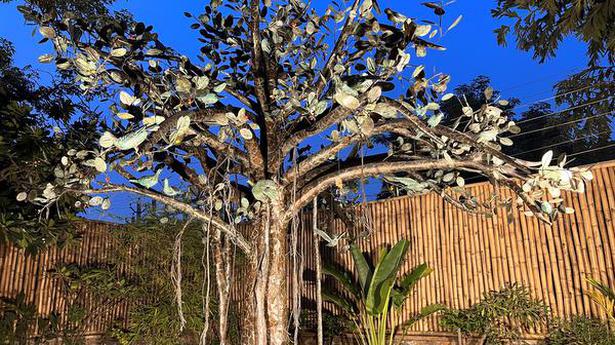 From finding folds in water to arriving at a common spiritual destination, an ongoing exhibition seeks to provide sculptors with their rightful place in visual arts

The third edition of iSculpt for Delhi exhibition is showcasing works of 20 sculptors, transforming India International Centre’s gorgeous Gandhi King Plaza into a sculpture court. Curated by seasoned art critic Uma Nair, it seeks to provide sculptors their rightful place in the pantheon of Indian artists.

“As an art critic who has been curating shows for 16 years, I have always found that when people put together shows they put up a lot of paintings but sculptures are often left out. Here, for the third year in succession, I am putting onto the stage a number of young and established sculptors,” says Ms. Nair.

Ms. Nair says, this year, it has taken a whole new meaning owing to the pandemic because “we don’t know what these artists have gone through in the past one year, both in terms of their expression and experiences as well as earning a livelihood.”

In an endeavour to explore sculptors’ relationship with the environment, a number of artists have created works that are born of an ecological echo. Neeraj Gupta’s ‘Heaven and Earth’ is a monumental elephant with pots, made of copper and bronze. The majestic sculpture exalts the beauty of the gentle giant and its place in the habitat.

“It is an ode to the elephant that stands as an endangered species and is on its way to extinction. From poetry to the cinema, elephants have inspired all of us for centuries. They play an important role in maintaining biodiversity. The figure of the elephant evokes a host of memories and will create multiple emotions in the minds of the viewers,” explains Mr. Gupta, who specialises in public art.

Ankon Mitra, who works with the technique of folds, has been studying and experimenting with the art form in nature. In ‘Fountain of Folds’, he brings out the folds in water. “Although, we do not associate folds with something that seems fluid and dynamic. However, when water freezes, like in snow or ice or when we see it in the clouds, we start discerning the patterns. So, I wanted to kind of imagine what the dynamism of water could look like in terms of folds,” explains Mr. Mitra.

Mr. Mitra wants to break the false notion that sees the ancient art of Origami as a child’s craft when in actuality it’s capable of standing tall with any other cutting edge technique.

National Award winner Keshari Nandan’s stoneware work is a reflection of the elements of nature. “The title of my work is ‘Human Being’. Technically, it is wood-fired stoneware, unglazed, heated at 1280 °C. The work is a symbolism of life and a reflection of the Pancha Bhoota, the five elements: earth, water, fire, air, and space that the human body, as well as the universe, is made up of, according to the Upanishads,” says Mr. Nandan.

Apart from the changing patterns of nature, the exhibition also looks at relationships between artworks and artists. Satish Gupta’s ‘The Conference of the Birds’ can best be described as an elegy to the 12th century Sufi poet Faridud-Din Attar’s eponymous poem. Mr. Gupta’s work has been created as a tree with two peacocks talking to each other.

Dhannanjay Singh’s ‘Man and the Tree’ reminds us of the equation between man and nature while underlining the importance of trees. Seema Kohli’s meditative work ‘Riding the waves of wind and water’ resonates with Atul Sinha’s rosewood masterpiece ‘Aradhak’.

While Prof. Biman Bihari Das’ ‘Lord Buddha’ in bronze evokes deep spirituality and tranquility, Rita Datta’s ‘Madhav’ is veneration of Lord Krishna in bronze. “Prof. Das has been creating the statues of Lord Buddha for more than 50 years. I chose his Buddha and picked a face in stone called ‘Nymph’ by Parmod K. Mann for the exhibition without realising that Mann was Prof. Das’ student at the Delhi College of Arts many years ago. So we are looking at different compositions, separated by several years. We are also looking at a guru and a disciple,” says Ms. Nair, adding ‘Madhav’ and ‘Lord Buddha’ are placed opposite each other at the exhibition. “We are basically looking at different ways of reaching the same goal. Isn’t it.?”

(iSculpt can be viewed at the Indian International Centre