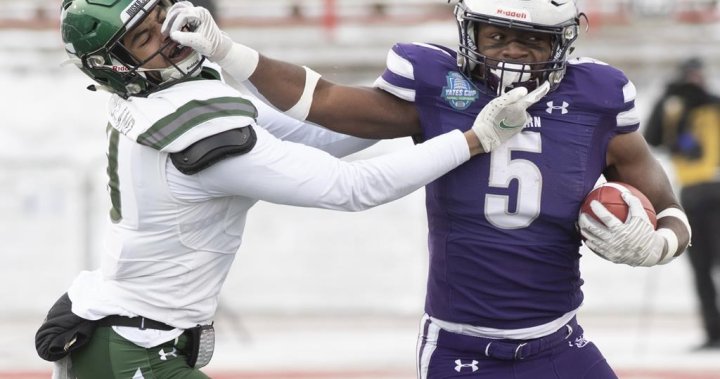 The University of Saskatchewan (USask) Huskies came up short in their bid for their first national title since 1998, falling to the Western University Mustangs 27-21 in the 56th edition of the Vanier Cup.

It was about -8 C at kickoff on Saturday afternoon in Quebec City. The game was played at the home stadium of the Laval Rouge et Or.

The Mustangs were the first to get on the board, with fifth-year running back Trey Humes taking the handoff and going right for the game’s first major to make it 7-0 Western.

The Huskies cut that lead to four, as David Solie made a 26-yard field goal.

The Huskies got their first major of the game in the second quarter. Quarterback Mason Nyhus had great pass protection to find Daniel Perry, who watched it all the way into his hands for six. The point after was blocked so the Huskies led it 9-7.

The Mustangs retook the lead on a 23-yard field goal from Brian Garrity to make it 10-9.

But late in the first half, Saskatchewan’s Mason Nyhus hooked up with Sam Baker down the sidelines with only a few seconds left on the clock to get the team into field goal range. David Solie came on for a 24-yard field goal attempt and he made it — even though he slipped on the follow-through. The Huskies led 12-10 at halftime.

In the third quarter, Mustangs quarterback Evan Hillock started to get the passing game going for the Eastern champs. He found Griffin Campbell, who fought off the Huskies defender to get into the end zone. After the convert, the Mustangs were back on top 17-12.

On the last play of the third quarter, it was the same two hooking up again for the Mustangs — Hillock to Campbell, who followed a couple of blockers into the end zone — and Western was now up 24-12.

In the fourth quarter, rookie tailback Edouard Wanadi took right up the middle for a big gain — a 56-yard run. That led to another Mustangs field goal, and an increase in their lead, now 27-12.

With 32 seconds left in the game, the Huskies brought in their jumbo blockers and handed it off to Josh Ewanchyna for the touchdown, cutting the lead to six after the convert.

The Huskies tried an on-side kick, but they were unsuccessful. The Mustangs hung on to beat the U of S Huskies for the national U Sports title, 27-21, as Western claimed the 56th edition of the Vanier Cup.