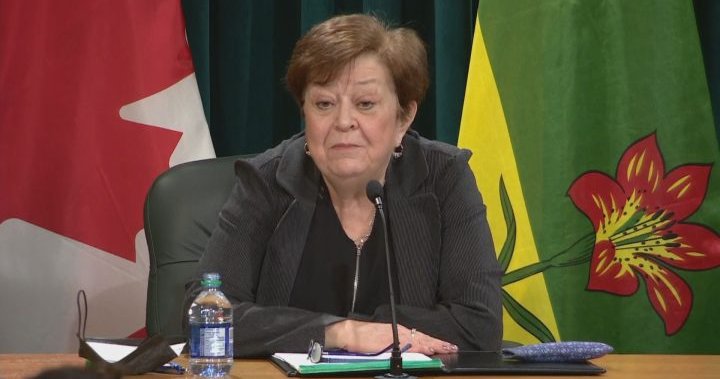 “It’s an attack on our government,” Donna Harpauer told reporters Wednesday afternoon of the Agricultural Producers Association of Saskatchewan (APAS) release suggesting she was blaming farmers for a projected deficit.

“I believe that it was very disingenuous for APAS to put out what they did publicly without even speaking to me on why it’s portrayed that way, and why we’re obligated by the provincial auditor to portray our budget in that manner.”

When detailing the 2021-22 mid-year report Monday morning, Harpauer said that despite significantly higher than expected revenues she was projecting a deficit of around $2.1 billion at year’s end — $97 million more than initially projected for the fiscal year.

“If you backed out the expense of crop insurance as well as the livestock producer support we would almost be balanced,” Harpauer said, explaining that crop insurance payouts were around $1.8 billion more than expected.

She added support for Saskatchewan’s ranching industry also dealt an unexpected financial blow to the tune of $292.5 million.

“It’s not fair to blame producers for a provincial deficit in a drought year when that surplus gets used up.”

Cost of drought having significant impact on Saskatchewan’s deficit

“People might look at what Minister Harpauer said on Monday and say ‘holy!’” Boxall said of Harpauer’s comments on the value of insurance claims.

“Crop insurance is actuarially sound. Between the federal, provincial, and the producer premiums, the money was within crop insurance to pay out the claims in a year like we had this year.”

“I’m not here to call out government. The support for Saskatchewan producers has always been there and I thank them for that. I never once insinuated that the money meant for producers through crop insurance isn’t there,” he said.

“I don’t think you’ll ever hear a producer complain that when there’s a surplus in crop insurance, that that goes into general revenue to offset a deficit or provide the services Saskatchewan people enjoy. The issue we want to raise today is that crop insurance is actuarially sound.”

But Monday, Harpauer dismissed the idea that she was lumping any blame onto producers.

In a latter penned to APAS President Todd Lewis, Harpauer said crop insurance funds are “well-managed” and also suggested the APAS release “creates the perception that government is unable to pay out claims”.

“In the future we hope APAS will remember that our government has been steadfast in its commitment to our agricultural producers, and that APAS doesn’t take that support for granted the next time it considers making such a reckless statement,” she wrote in the letter which was also signed by Agriculture Minister Dave Marit.

She added to reporters that while money can be withdrawn from the crop insurance fund for other purposes, there is a “process” for doing so and that claim payouts haven’t been jeopardized in the past.

“We’re talking about producers’ dollars that are there to backstop them.”

He also suggested surplus money could be better managed.

“They’re not invested in markets getting the fair return that producers deserve and they’re getting the lowest interest rate possible. It’s beyond the pale that a government would threaten in a letter support for producers.”

Harpauer said around $1.3 billion dollars remains in the surplus.

The province has asked APAS to retract their release.

Boxall told Global News the organization has no plans to do so.