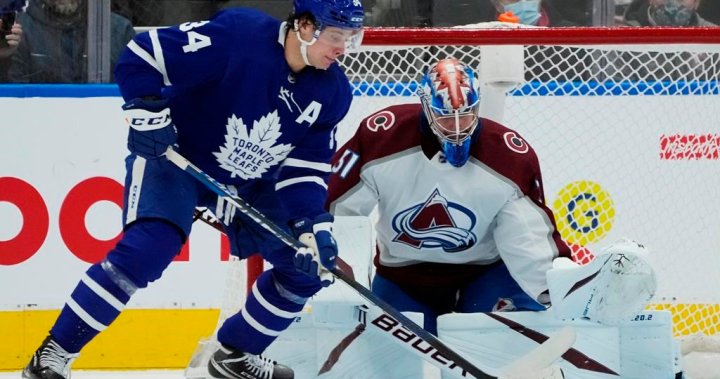 TORONTO – The Maple Leafs knew there were plenty of built-in excuses.

Just back from a California road trip, the jet lag had yet to lift, bodies were tired, and it had been more than a week and a half since the luxury of a day off — all with one of the NHL’s hottest teams waiting on deck.

None of it mattered.

Auston Matthews scored three times to register the fourth hat trick of his career as the scorching Leafs thumped the Colorado Avalanche 8-3 on Wednesday night.

John Tavares added a goal and two assists for Toronto (17-6-1), while William Nylander scored and set up another. Jack Campbell made 28 saves.

Jason Spezza, Travis Dermott and Pierre Engvall had the other goals for the Leafs, who have won five straight and are 15-2-0 over their last 17 to take over top spot in the NHL’s overall standings. Michael Bunting added three assists, while Mitch Marner and Alexander Kerfoot chipped in with two each.

Nazem Kari, with two, and Samuel Girard replied for Colorado (11-7-1). Jonas Johansson stopped 33 shots as the Avalanche lost for the second time in their last three contests after winning six in a row.

“The energy in the room was that it’d be easy to make an excuse right now,” Dermott said. “But tonight was a game that I think we could really show our character.”

Colorado star Nathan MacKinnon, who had two assists, returned after missing eight games with a lower-body injury, while Kadri suited up at Scotiabank Arena as a visitor for the second time since being traded to the Mile High City in July 2019.

“That was not the issue,” Colorado captain Gabriel Landeskog said. “The issue was we just didn’t play good enough.”

That did mean, however, University of Toronto netminder Jett Alexander dressed as Johansson’s emergency backup for warmups. But the 22-year-old from Bloomfield, Ont., remained in the locker-room area until third-stringer Justus Annunen arrived to witness the carnage up close in the second period.

“I don’t think it was an 8-3 game if we’re being honest,” said Leafs head coach Sheldon Keefe, whose team built a 3-0 lead in the first. “We played against a really good team that had some adversity.

“That makes the game feel a lot different than it really was.”

Coming off a trip that saw them sweep the New York Islanders and all three California teams, the Leafs went up 1-0 at 4:31 of the opening period when Tavares delicately fed a pass ahead to Nylander, who ripped his 10th goal of the season.

Toronto went up 2-0 at 7:57 when Spezza tapped home his fifth after the Colorado netminder could only get a piece of Nick Ritchie’s shot.

The Leafs went up by three at 14:24 when Matthews — minus his trademark moustache following a shave for charity — took a feed from Marner and went between the legs and back against the grain to roof his team-leading 11th goal, and fourth in as many games.

“He’s such a special player,” Dermott said. “When he’s hot like this, you just want to put the puck … not even on his tape.

“You put it on his backhand — he’ll make magic out of that.”

Colorado got on the board with 1.2 seconds left in the period when Girard blasted a one-timer past Campbell for his second.

The NHL’s second star in November after going 9-2-0 with a league-leading .959 save percentage, the Leafs goaltender made a number of big stops early in the second period.

But the Avalanche finally broke through to make it 3-2 at 11:57 when Kadri — the league’s third star last month thanks to 21 points in 10 games — swept his eighth past Campbell.

The Leafs got that one back just 47 seconds later when Dermott’s fluttering one-timer beat Johansson upstairs for his first.

Campbell then made terrific saves on Logan O’Connor and Alex Newhook in quick succession before Tavares slipped his own rebound through Johansson for his 11th to match Matthews and push Toronto’s lead back to three at 5-2.

But Matthews retook top spot on the Leafs’ stats page when he collected a pass from Marner in tight and outwaited Johansson for his 12th just 46 seconds into third.

The reigning Maurice (Rocket) Richard Trophy winner then fired his third of the night at 8:41 on a shot that beat the Colorado netminder shortside to continue the onslaught before Engvall and Kadri rounded out the scoring.

“Those first two goals, really good sequences by that line,” Keefe said of the Bunting-Matthews-Marner trio. “Just unbelievable passes by Mitch Marner in both cases.

“On the third one, (Matthews) gets it alone. That’s a pretty good shot … kisses the post.”

Fans around Scotiabank Arena chanted Matthews’ name after hats rained down on the ice following his hat-trick snipe.

“It definitely gives you chills down your spine,” he said. “It’s just a really special place to play.

“It’s fun when the crowd gets going like that and you play as well we did tonight.”

Notes: The 21 goals the Leafs have scored over their last four games equals the team’s October total. … Kadri’s second goal was the 200th of his career. … Bunting stretched his point streak to five games (two goals, seven assists) to tie Detroit’s Moritz Seider for a longest by a rookie this season. … The Avalanche visit Montreal on Thursday before heading to Ottawa on Saturday. … The Leafs play in Minnesota on Saturday and Winnipeg on Sunday.

This report by The Canadian Press was first published Dec. 1, 2021.