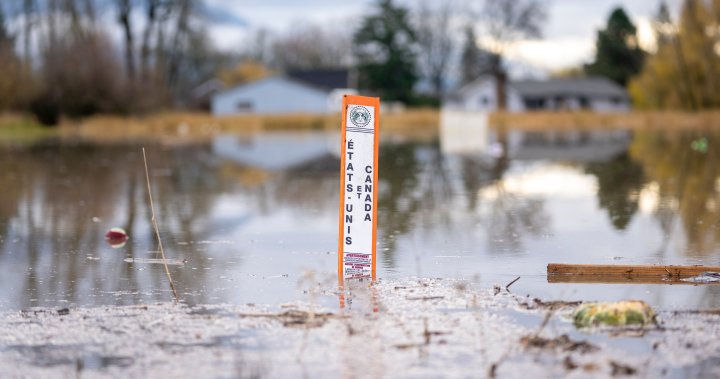 A new national warning system for atmospheric rivers may still be years away from completion, according to Environment Canada and Climate Change Canada.

The confirmation comes as one of the storms made landfall in B.C. on Tuesday — the fourth of its kind this month. The first one caused deadly landslides and displaced thousands of people.

Despite such impacts and countless millions of dollars in damage, the federal department said it won’t speed up the launch of such a system, as rushing the job could do more harm than good.

“Experts are engaged and will remain active on this topic; however they cannot compromise a process that ultimately ensures that ECCC services are reliable, accurate and useful,” a spokesperson wrote by email.

“Fast tracking something of this nature is not possible … compromising the process could put public safety at risk.”

1:45
‘It got too close the first time’: Hope, B.C. residents braces for more floods amid another atmospheric river

‘It got too close the first time’: Hope, B.C. residents braces for more floods amid another atmospheric river

Environment Canada’s timeline is much longer than the one B.C. Public Safety Minister Mike Farnworth has suggested.

Last week, he said he was told a national atmospheric river warning system “will be coming, looking to be implemented at the beginning of January 2022.”

Up to speed on Environment Canada’s projections on Tuesday, however, Farnworth said he’s “glad the work is underway.”

“I hope that it is being done as expeditiously as possible, and obviously, given the events of these past few weeks, I would hope it becomes very much a priority.”

Read more:
B.C. under rain, wind and snow warnings amid another atmospheric river

Atmospheric rivers tap into subtropical moisture near the equator and sweep across the Pacific Ocean — normally in a northeasterly direction — to hit the west coast of Canada and the United States.

The U.S. already has an atmospheric river warning system that uses aircraft to fly hundreds of kilometres into the Pacific, where probes are dropped into the atmosphere to measure intensity.

Those levels are ranked between one and five, similar to the way hurricanes and tornadoes are ranked.

“I think the public is just becoming aware of the term ‘atmospheric river,’ and they don’t have a good sense of what it really means,” he explained.

“A rating scale is one way of kind of educating the public to the intensity of one of these events.”

The early timing and increase intensity of atmospheric storms in B.C. this month caused Environment Canada to issue its first ‘red level alert’ for weather in Canada.

That alert was largely driven by the vulnerability of the province’s already soaked and damaged landscape, weather preparedness meteorologist Armel Castellan said at the time.