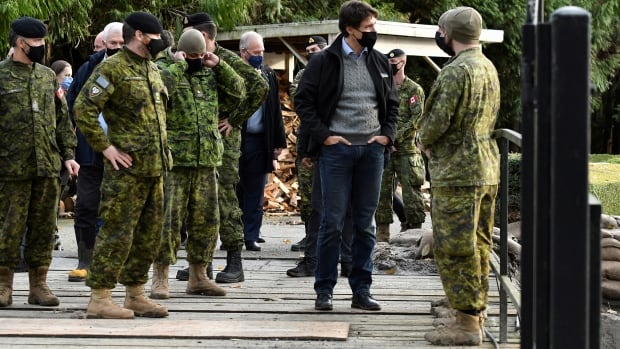 Prime Minister Justin Trudeau has announced the formation of a new federal committee to manage British Columbia’s recovery from the recent flooding and deadly mudslides.

Trudeau made the announcement at a news conference alongside B.C. Premier John Horgan in Victoria on Friday evening, at the end of his first trip to the province following the extensive flooding two weeks ago.

The committee will be co-chaired by Emergency Preparedness Minister Bill Blair and B.C. Public Safety Minister Mike Farnworth, with other committee members to be announced later. It will also include Indigenous representatives.

Trudeau said he hopes the committee will also shape the response to future extreme events, and the larger government response to climate change.

“It can’t be just about weather-proofing homes, although that’s an important piece,” he said.

Hundreds of people remain displaced by the floods, with highways damaged and supply chains choked heading into another weekend of storms.

He said he saw “amazing” strength and resilience from first responders there, and praised community efforts in the wake of the floods.

Though Abbotsford and the Fraser Valley region have been hit hard by floods, the disaster has impacted communities across the province — including in the Interior.

In particular, First Nations communities in the Nicola Valley have said they have not received enough support from governments.

The community of Merritt is also in the Nicola region. It faced evacuation orders due to wildfires in the summer and has now been completely evacuated due to floods.

Asked by reporters why he did not visit these communities on Friday, Trudeau said it was due to logistics and not wanting to disrupt emergency operations.

“The decision was made that Abbotsford was a good place to go to express my support,” he said. “From there, [I could] talk directly about the supports and the fact that we are going to be there for people throughout the Interior of B.C.”

Trudeau and Horgan also announced that the provincial and federal governments will be matching donations to the Canadian Red Cross’s flood fundraising campaign for 30 days starting Friday.

That means every $1 donated will be tripled to $3, with the governments also retroactively matching every donation since the campaign started on Nov. 17.

The Red Cross and the province of British Columbia had earlier partnered to offer $2,000 to British Columbians who were ordered to evacuate their homes from Nov. 14 to 16 due to flooding.

This is in addition to the Disaster Financial Assistance available to those affected. To access these supports, displaced British Columbians need to register with the Red Cross by calling 1-800-863-6582, between 8 a.m. and 8 p.m. PT.

In addition to the donation campaign, the federal government had earlier dispatched 500 soldiers to help with flood recovery in B.C. and also provided emergency financial assistance to help alleviate pressure on the supply chain.

Horgan said the prime minister had also brought up the province’s flooding emergency with U.S. President Joe Biden during talks last week, which led to fuel supplies being provided to B.C. and collaboration on water management in Washington state.

Even as announcements were made to help the province rebuild from flood damage, more rain threatens to worsen the impact.

Up to 120 millimetres of rain have been forecast to fall over the weekend.