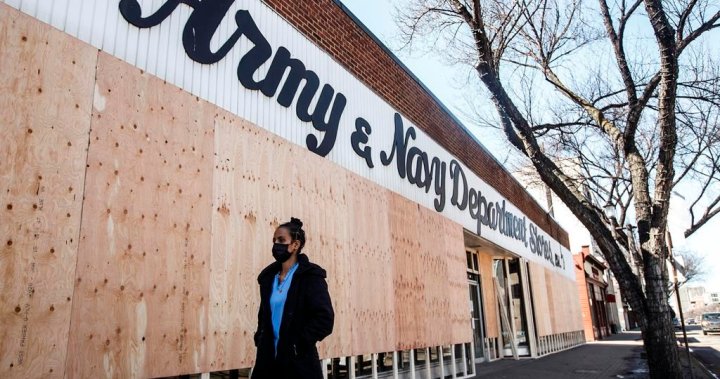 After serving Western Canada for more than a century, the iconic discount chain known for its annual shoe sales took a walk at the start of the COVID-19 pandemic and never returned.

Army & Navy closed its five locations – including its flagship in Gastown – in May 2020, but reopened the New Westminster store for one final liquidation sale the next month.

“The Army & Navy department store will always be in my heart,” owner Jacqui Cohen said at the time.

An official press release stated that Army & Navy had hoped to reopen after shuttering its stores and temporarily laying off staff in March 2020, but the “economic challenges of COVID-19 have proven insurmountable.”

Cohen told Global News the pandemic only exacerbated the sales hit from Amazon and online shopping.

“It just became insurmountable that the company could continue.”

Retail consultant David Ian Gray said he doesn’t think there was any interest in modernizing Army & Navy and believes it ran its course as a retail concept.

“It was really behind the times in terms of modern technology and integrated online systems,” the DIG360 principal told Global News.

“I kind of feel the owner here saw the writing on the wall even prior to COVID.”

2:10
Squire Barnes on the 100th anniversary of the Army & Navy stores

Disney closed all of its 16 Canadian stores this year including its three B.C. locations at Metrotown in Burnaby, Guildford Town Centre in Surrey and Pacific Centre in Vancouver.

The loss of the brick and mortar Mickey Mouse & Friends merchandise spots followed a March press release from Disney that announced plans to focus on online sales and the closure of at least 60 stores in North America.

Read more:
Disney to close most of its Canadian stores by Aug. 18. Here’s where they’re located

Nordstrom and the Hudson’s Bay Company pivoted to curbside pickup and temporarily reduced their hours.

Meantime, storefront retail vacancy rates in the city of Vancouver jumped 2.8 per cent – from 9.3 per cent in spring 2020 to 12.1 per cent a year later.

The amount of prime leasing opportunities that have opened up since March 2020 is unprecedented, according to real estate agent Sherman Scott, who specializes in urban retail leasing and sales.

“Sadly, I’ve seen quite a few tenants turn over due to the pandemic,” said the Colliers associate vice president who has spent more than 25 years in commercial real estate.

“Many unfortunately were pushed over the edge.”

Survival was a tall order even for Starbucks, which accelerated its five-year restructuring plan into 18 months as it responded to changes in consumer habits during COVID-19.

The Seattle-based company closed up to 300 Canadian locations by the end of March.

Starbucks wouldn’t divulge how ‘grande’ its B.C. exit was.

In the city of Vancouver alone, Global News mapped more than 100 stores in recent years.

65 remain while at least 52 locations are no longer showing on the Starbucks’ app – with the majority disappearing since March of last year.

Read more:
Starbucks to close up to 300 stores in Canada by end of March

“Canada is taking a much greater hit and it’s concentrated a lot more on the downtown cores,” Gray told Global News.

Starbucks is adding drive-thrus while expanding mobile ordering and delivery as it blends the traditional “sit and stay” café with more grab and go options.

“They see growth there but I worry a little about the brand,” said Gray.

“The cache, the premium brand that they built that’s very experiential and the store means something when you’re in it.”

Gray predicts a perfect storm is brewing for retailers in the new year when deferred rents will come due amid staffing and supply chain issues.

“Maybe the biggest risk that they’re gonna face through the whole pandemic is still to come.”