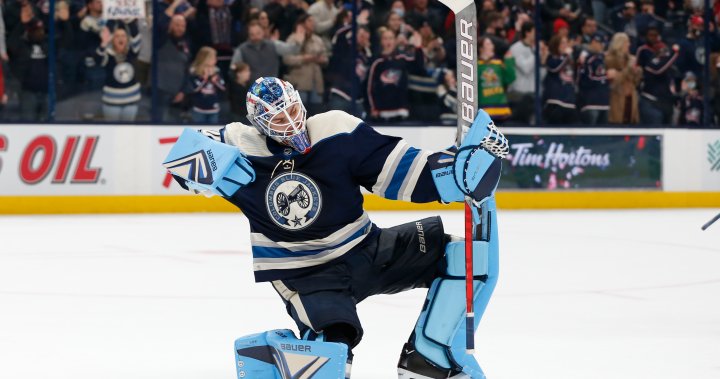 The Winnipeg Jets are slumping.

The Jets scoring problems continued as they were shutout 3-0 by the Columbus Blue Jackets for their fourth straight defeat in their first meeting since the blockbuster trade nearly a year ago.

The loss in Columbus Wednesday night looked quite similar to their other recent losses: unable to find the back of the net despite plenty of shots on goal, a fruitless power play, a struggling penalty kill, and a great performance by their goaltender who continues to get no run support.

“Tonight was the first night I thought we were looking for offence at the expense of our defence,” head coach Paul Maurice said. “That’s the only time I’ve been concerned about it. We’re in one offensively. We got good shooters that are missing nets on good opportunities. And there’s gonna be a stretch where the puck doesn’t want to go for you, and you’re banging it around. I thought their guy had to make some saves tonight.

“We did get a little more traffic, but I’d be lying if I’m not worried about our offence, but I know it’s there.”

“We’re going to have to find a different way to get puck to the net. We get chances every night, but it’s a dangerous thing to say when they’re not going in.”

Paul Maurice on capitalizing on scoring chances, not getting trapped in a defensive game, and more.

Jackets tender Elvis Merzlikins finished with 36 saves for his first shutout of the season and the eighth of his career.

Maurice switched up his forward lines in the final period, but it didn’t produce the desired results.

“At some point they’re going to go in,” said Jets forward Nikolaj Ehlers. “But you still want to score, but you want to play well still.

“I think it’s just a matter of getting back to that shoot-first mentality.”

“We want to continue shooting and getting shots to the net, we just need more traffic there.”

The Jets have scored just four goals on 153 shots during their current four-game losing skid.

Winnipeg had one of the top ranked power plays in the NHL at the start of the season, but they went 0-for-4 against the Jackets on the man advantage and have failed to score on their last 14 straight chances on the power play.

Their penalty kill hasn’t been any better and less than a week after the end of a win streak, there now seems to be countless problems to address.

“The concern level is probably where it was after 0-2,” said Andrew Copp. “Not very high. A lot of confidence in our group, but with that said, the sense of urgency to get it back rolling again. We’ll have a good practice tomorrow. We’ll be focused. We’ll be ready to go for Friday.”

Gregory Hofmann got the scoring started for the home team with just under five minutes to go in the first when he took a Max Domi feed on a 2-on-1 and put it past Connor Hellebuyck.

Each side had a chance on the power play in the first and Winnipeg got another in the second but to no avail.

It was a mostly sleepy game until 2:20 into the third period when the fireworks began. After the Blue Jackets were whistled for an offside, Domi played on and put the puck into the Winnipeg net, angering every Jet on the ice. And when it seemed the scrum was being dismantled, Domi grabbed Evgeny Svechnikov and threw a few punches at the Jets winger to pick up an extra minor penalty.

But the Jets couldn’t capitalize on the man advantage, and after Riley Nash was called for a pretty weak cross-checking penalty a few minutes later, the Jackets doubled their lead on the power play when Zach Werenski wired a wrist shot past Hellebuyck.

Winnipeg would get one last crack when Domi took another penalty late in the third, but they did not get a shot on goal, and are now one for their last 22 chances.

Andrew Peeke sealed the win with an empty netter from his own end, giving the home side a 3-0 win.

It was Hellebuyck’s first career loss against Columbus after winning his first four starts against the Blue Jackets. He made 29 saves in the defeat.

Patrik Laine missed the game with an injury after the recent death of his father.

The other two players involved in last January’s trade, Pierre-Luc Dubois and Jack Roslovic were both pointless. Dubois was a minus-2 in his first game back in Columbus.

Winnipeg will try to break out of the slump Friday afternoon in Minnesota.

John Shannon on the Jets: November 24