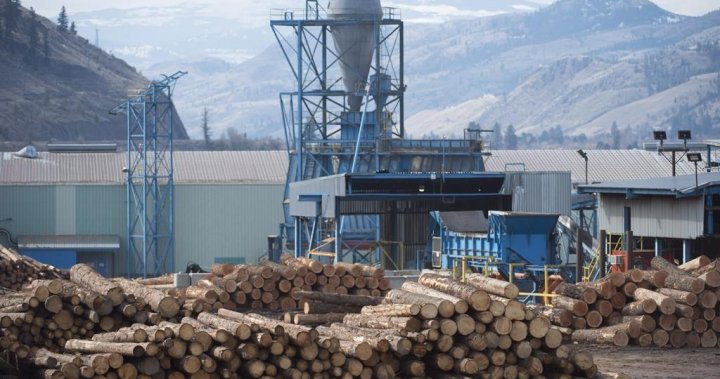 International Trade Minister Mary Ng and B.C.’s lumber producers say they are disappointed that the U.S. Department of Commerce has decided to increase duties on Canada’s softwood lumber producers.

The U.S. government said Wednesday that its final combined anti-dumping and countervailing duty rate for most Canadian producers will be 17.9 per cent.

That’s slightly below the 18.32 per cent preliminary rate issued in May but double the initial 8.99 per cent rate.

Ng called on the U.S. to stop imposing “these unwarranted duties” that harm Canadian communities, business and workers while also raising costs of housing and renovations for U.S. consumers.

The BC Lumber Trade Council says the final rates are not unexpected but still disappointing, especially since U.S. producers are unable to meet domestic demand.

“Our strong hope is that the U.S. industry will end this decades-long litigation and instead work with us to meet demand for the low-carbon wood products the world wants, including American families,” stated council president Susan Yurkovich.

“Until then, we will continue to vigorously defend our industry against these meritless allegations.”

Ng said the Canadian government will continue to defend the softwood lumber industry including through litigation under Chapter 10 of the CUSMA trade deal with Canada, the U.S. and Mexico, NAFTA’s Chapter 19 and at the World Trade Organization.

“At every step of the way, rulings have found Canada to be a fair trading partner,” she said in a news release.

“Canada has always been willing to explore ideas that allow for a return to predictable cross-border trade in softwood lumber and remains confident that a negotiated solution to this long-standing trade issue is in the best interest of workers in both our countries.”

“Any amount of duties unfairly targets our softwood lumber exports and these decreasing and then increasing rates create uncertainty on both sides of the border,” he said in a news release.

Horner said the U.S. is a critical customer with 91 per cent of softwood lumber exports valued at $1.2 billion going south.

Conservative MPs say the softwood lumber duties show that Prime Minister Justin Trudeau’s promise of a renewed relationship with the U.S. is failing.