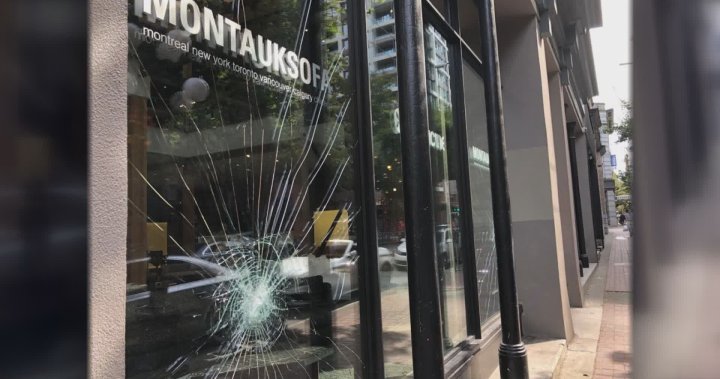 Vancouver’s mayor delivered his final State of the City address before next year’s municipal elections.

Speaking to the Greater Vancouver Board of Trade on Tuesday, Kennedy Stewart said the city is on pace to approve nearly 100,000 homes over a 10-year period, well ahead of targets.

He also said the city continues to move towards becoming more walkable and transit-oriented, a key component of the city’s Climate Emergency Action Plan.

Stewart acknowledged that more needs to be done to get the city back on track, especially amid concerns over growing crime and vandalism.

“The operations of the police, we have to make sure they’re well-funded,” he said.

“I think they are well-funded. But that will be another thing that we talk about through the debate. We’re waiting for the police board’s submission to us as to what they think they require this year and so that will be rolled into the budget debates.”

John Clerides has had the windows of his business, Marquis Wine Cellars, smashed several times. He said he said crime is on the rise in his neighborhood and the police need more support.

“His fundamental responsibility — No. 1 over anything — is to keep the citizens safe,” he said.

Coun. Lisa Dominato said crime is one of the top concerns she is hearing from residents.

“I’d like to see the mayor actually address our concerns and show up to address these issues,” she said.

“We’ve recently had a number of briefings with VPD. The mayor wasn’t present for those meetings around the budget and around the issues that are facing the city, and I’d like to see him involved in that.”

Tuesday’s event was Stewart’s final State of the City address before next fall’s municipal elections.

He faces a crowded field as at least three candidates — John Coupar of the Non-Partisan Association, Ken Sim of the  new A Better City party, and political strategist Mark Marissen — intend to challenge him for the mayor’s chair.