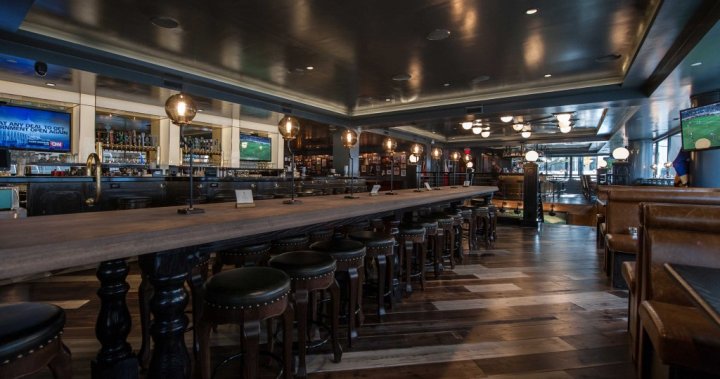 After an almost 10-year run, Emik Malak pulled the final shift at his Bellaggio Café at the Vancouver Convention Centre in mid-September.

“Sometimes you have to say, I don’t see light at the end of the tunnel,” the Bellaggio owner told Global News.

Reliant on subsidies since COVID-19 hit, the tables were empty and Malak knew the location that relied heavily on tourism – was on borrowed time.

“There [are] no cruise ships, no tourists and no conventions,” he said.

At the height of summer pre-pandemic, Malak employed up to 35 staff. Since September of 2020, he’s let 25 go amid sinking sales.

In May of last year, The Holy Crab was also forced to shut down.

The owner of the Louisiana-inspired seafood restaurant, which amassed a loyal following in its three years on Robson Street, told Global News he didn’t want to run away from his obligations – but fell victim to a landlord who refused to participate in the government’s rent relief program.

“I feel like what small businesses like mine really need in this time is some sort of a break,” Henri William said, days before permanently closing his restaurant.

Seventeen months later, William, who has since pivoted to a new career in the tech industry, said there was a loophole in the CECRA program that required the landlord to be the proactive player and apply for the grant but some were reluctant to pay 25 per cent of the rent so their commercial tenants could get the subsidy.

6:03
Valentine’s Day at the Holy Crab

Jeff Donnelly is slowly reopening his 17 neighbourhood pubs and cocktail clubs in Vancouver and Toronto.

“Personally I’ve gone millions of dollars into debt this year,” said Donnelly, who started his business in 1999.

In mid-March 2020, the Donnelly Group closed all of its establishments – not knowing when or if they would reopen.

At the time, the independent pub group had over 1,000 employees. Donnelly said more than 900 were laid off.

“When we were closed down in the heat of the pandemic, the government just said every dollar that you get goes directly to your landlords.”

The popular Blackbird Public House in Vancouver’s financial district was one of them.

“This is a year and a half later so it’s a lot easier to talk about,” Donnelly said.

Donnelly was set to renew the lease on what he considered a “cultural hub” for his staff when he too said the landlord decided not to apply for the rent subsidy.

“They asked us to pay the rent which we just decided was unfair, you know, it didn’t make any sense,” Donnelly said.

“It was a really tough one, it was one of my one of my favourite places.”

With 60 per cent of his workforce back, Donnelly feels fortunate he’s able to carry on.

Stopping alcohol sales at 10 p.m. was not sustainable when 60 per cent of the pub’s business occurred between 10 p.m. and 2 a.m.

“If you cut our sales by half with these original restrictions, then again cut that by more than half, we’re just bleeding out,” general manager Matt Thompson told Global News at the time.

In a Nov. 3 post to social media, Taylight Brewing in Port Coquitlam announced it would be closing its doors on Nov. 5. after a challenging twenty months.

The craft brewery opened in August 2018 and had made the list as a stop on the BC Ale Trail’s North of the Fraser route.

In its Facebook post, Taylight stated the effects of COVID-19 had unfortunately caught up to them – adding they were saddened to know that they “are not the first and most definitely won’t be the last small business to shut the doors due to the lingering effects of this unprecedented pandemic.”

The BC Hotel Association said its members have also been hit hard by the loss of international travel, conferences and tours.

President and CEO Ingrid Jarrett told Global News that several thousand rooms around the province have been closed since the beginning of the pandemic.

Sixteen B.C. hotels pivoted to quarantine Canadian travellers returning home, while 1,542 rooms were snapped up by the province to house those experiencing homelessness.

Other properties, like Vancouver’s Trump International Hotel, closed their doors for good.

“Several hotels and several as a description is understating that number, either changed hands to be repurposed, or closed due to financial constraints and bankruptcies such as the Trump tower,” Jarrett said.

After surrendering his lease at Canada Place, Malak said he will focus on his other Bellagio Café on Hornby Street.

“If the subsidies stop, you will see 50 per cent of the restaurant industry in B.C. going belly up,” said Malak, who is walking away with few debts.

“We can’t blame anybody but the coronavirus, and you know, coronavirus is not going away.”