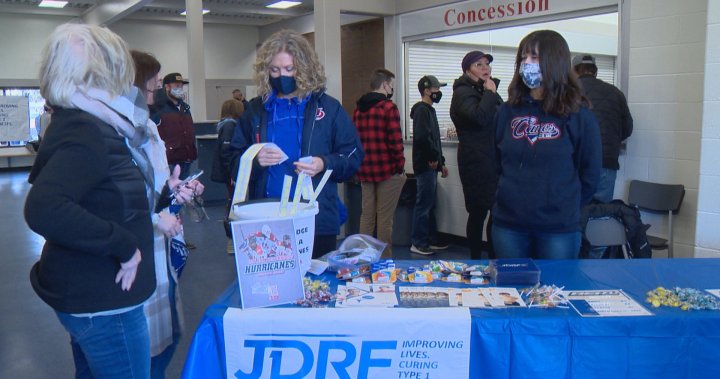 Braigh LeGrandeur said he remembers driving to a spring hockey tournament in 2018 when he realized something was off.

“I was feeling really weird,” he said. “I was drinking lots of water, I was always hungry and super fatigued, too.”

His uncle, an emergency room doctor, recommended he get some tests. He had a suspicion about what was going on.

A few days later, that hunch would be confirmed.

“I remember I was cutting potatoes for supper and my dad walked in and said, ‘We need to go to the hospital. You’ve been diagnosed with Type 1 diabetes.’”

Type 1 diabetes is an autoimmune disease in which the body’s immune system destroys the beta cells in the pancreas, meaning there is no insulin being produced.

At the time, Braigh’s family didn’t know a lot about his new diagnosis.

“Obviously, when your child is sick and you’re powerless to really do anything about it and you don’t know much about it, we were very upset,” said Dave LeGrandeur, Braigh’s father. “He was 14 years old at the time — just a baby for us.”

From the moment he was diagnosed, Braigh took matters into his own hands. He learned how to give himself his insulin injections and how to manage his diabetes. Nothing was going to stop him from getting back on the ice.

Today, Braigh plays for the Lethbridge Hurricanes U18 AAA team. To mark Diabetes Awareness Month, the team organized a fundraiser for the Juvenile Diabetes Research Foundation during their game on Saturday.

Read more:
With diabetes on the rise, Canadian doctor awarded for advancing treatment

“I think it’s just important to bring that awareness and what it’s like and to know that he can still compete at a high level even though he’s diabetic,” said team manager Robyn Henderson.

Tickets for a 50/50 draw were sold at the door with half the proceeds going to the JDRF to help fund Type 1 diabetes research.

“The more money we can sort of filter that way, the more likely in Braigh’s lifetime there will be a cure for Type 1,” said Jennifer LeGrandeur, Braigh’s mother.

The game against the Calgary Royals U18 AAA team started with an announcement about the fundraiser and a ceremonial puck drop.

More than $600 was raised to be donated to the JDRF. The winning ticket was bought by the Calgary Royals manager, who donated it back.

“I think it’s really important for people to just become aware,” Henderson said. “And if we can use our team and our game today to help promote that, I think it’s a great way that we can help that promotion and support Braigh and other players with diabetes.”

For Braigh, the support from his teammates doesn’t go unnoticed.

“In my time playing hockey, I haven’t seen much stuff for diabetes awareness,” he said. “So it’s a special day for me and for the diabetes community. It means a lot.

“I’m still playing hockey. I’m still a normal kid. I just have extra things to do in my life.”