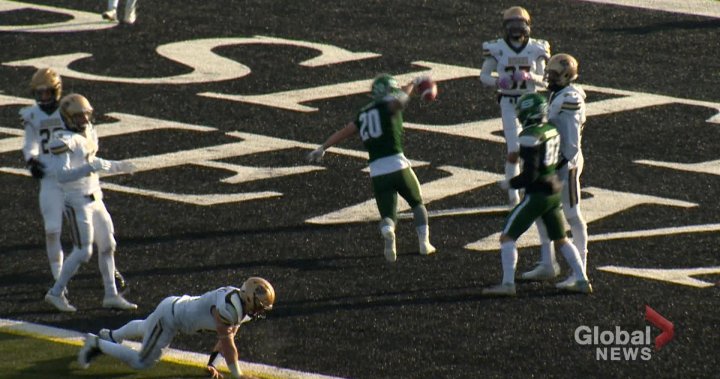 The University of Saskatchewan Huskies football program is once again the top team in the Canada West conference after defeating the University of Manitoba Bisons 45-17 on Saturday afternoon to claim the 84th Hardy Cup, the 20th in program history.

The team was lead offensively by four-year back and Canada West all-star Adam Machart, who chewed up 223 yards on 20 carries and finished the afternoon with a trio of touchdowns.

However the result, the dogs didn’t get the start they were looking for.

After moving the chains 54 yards into the Bisons side of half, quarterback Mason Nyhus was picked off by Arjay Shelley, who returned it deep into Saskatchewan territory on a 65-yard run back.

Three plays later, Jackson Tachinski called his own number and punched the ball in from the one-yard line to give the visitors an early 7-0 lead.

Just five minutes into the opening quarter, the Bisons looked primed for a big day as running back Michael Ritchott blew through a hole and ran right up the middle of the field en route to a 53-yard touchdown, the longest rush on the afternoon for either team.

“I think we came out too fired up, we kind of lost our minds at the beginning of the game, spotted them 16 right off the hop” head coach Scott Flory said. “But you know what, nobody ever batted an eye, nobody panicked, there was calm throughout and the guys responded, they just kept playing.”

Machart agreed that “there was no panic.”

“We weren’t worried,” he said. “We know the team that we are and we know what we’re capable of. It was kind of like, we just handed them 16 points, let’s figure it out here, let’s cut the mistakes and let’s go play some football.”

First-year linebacker Lane Novak added that the team “came out a little slow” but bounced back.

“We rallied together, we figured it out, we figured out what we were going to do on defence, we did our adjustments and wow, just played outstanding.”

It took the Huskies until the end of the quarter to start getting some traction on offence. Machart gobbled up 19 yards on a pair of runs before Ryker Frank added nine on the ground to end the quarter.

The continuation of the drive in the second quarter led to pay dirt as Machart finished things off with a seven-yard scamper to make things 16-9.

“I mean, we have as many explosive plays on the ground as we do through the air,” Flory said. “So it’s pretty good when you’ve got a litany of backs, and the offensive line really stepped up.”

And, as has been the story for the Huskies all season, the team came out firing on all cylinders to open up the third quarter.

Read more:
USask athlete leading Huskies — both on and off the pitch

After a Nathan Cherry sack forced Manitoba to punt on their opening possession, the dogs made them pay. Machart broke out with runs of 12 and 25 yards before capping off the 57-yard drive with a three-yard plunge for a touchdown, giving Saskatchewan its first lead of the afternoon.

The team never looked back, adding a four-yard Machart scamper in the third and a fourth-quarter Colton Klassen 17-yard end zone snag in the fifth year’s final game at Griffiths Stadium. Frank added the final nail in the Bisons coffin, turning on the jets with minutes left as he rumbled for a 50-yard rushing touchdown to seal the victory in the Hardy Cup.

The team’s veterans are no strangers to the Canada West championship game, having played in it for three consecutive seasons, but this go-round more was asked of them and as they have done all season, they delivered.

“Machart is a stud, he’s a great player and one of my best friends here in Saskatoon,” Nyhus said. “It makes my life pretty easy when I can give him the ball and he’s taking it for 10 or 20, and he was also fantastic in the pass game, too, with checkdowns and whatnot.”

Their Hardy Cup performance has now opened the door for an opportunity that no current Huskies player has ever experienced: win a national semifinal to gain a birth in the Vanier Cup.

The team will take a bit of time to celebrate the victory, although the duration varies depending on who you ask.

“I think it’s coach Flory’s term, 30 minutes of celebration and then you’re on to the next week,” Novak said. “We’re going to celebrate this. We’re going to enjoy this as a team in the locker room.”

When that time is up, the team is ready to prepare for an unfamiliar foe in the Uteck Bowl: the RSEQ champions and top-ranked team in the nation, the Montreal Carabins.

“I’ve watched about three-quarters of a game, I haven’t watched much of them, but our staff have,” Flory said. “We were preparing for the Bisons, but you can’t not try to get ahead a little bit, but trust me, my Saturday night won’t be lifting champagne, I’ll be watching football.

“We’re walking into a stadium that none of our guys have ever been at or played at. I mean, I’ve been there so I can kind of paint the picture for them. But at the end of it, we’re going there to take it over, we’re going to make it our house.”