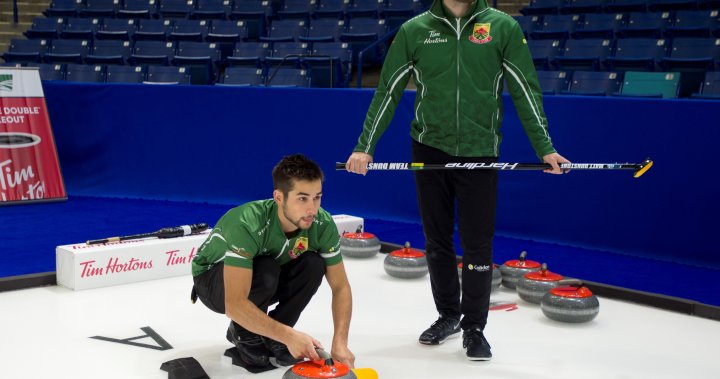 It was like old times for Colton Lott on Friday even if the surroundings were a tad surreal and completely unexpected.

With curling broom in hand and sporting a borrowed uniform, Lott and skip Matt Dunstone hammed it up for photographers shortly after completing their pre-competition practice session Friday at the SaskTel Centre.

The former junior champions have reunited at the Tim Hortons Canadian Curling Trials after a surprise team announcement a day earlier. Lott will fill in on Team Dunstone for regular third Braeden Moskowy, who’s unable to compete due to personal reasons.

Lott was playing in a mixed doubles league with fiancee Kadriana Sahaidak on Wednesday night in Winnipeg Beach, Man., when Dunstone reached out to see if he could join them at the Olympic qualifier.

“I was astonished,” Lott said. “It’s a little overwhelming. But overwhelming in a way that I’m fully ready for this and can’t wait for what’s to come.”

Dunstone and Lott, both 26, won Canadian junior titles together in 2013 and 2016 and have kept in touch since moving on with new teams at the men’s level. Lott has most recently played third for veteran skip Pat Simmons, but they did not make it out of pre-trials.

Lott has played against Team Dunstone on occasion over the years but is still getting to know the front end of Kirk Muyres and Dustin Kidby. With Lott’s team kit — in Saskatchewan green, of course — still en route, Muyres gave him his jersey for the training session.

“You can prepare as much as you can and things change in an instant,” Kingsbury said. “That’s sport, that’s life, that’s everything. Being able to adapt is how I want these guys to define themselves.

“That’s kind of always been a theme, so I think this is just another example of that.”

Team Dunstone announced the lineup change in a social media post without providing further details on Moskowy’s absence. The post was accompanied by a picture of Lott and Dunstone from their junior days.

“He’s one of the best shot makers in the world,” Dunstone said. “That’s what you need at these events.”

As the lone Saskatchewan-based team in the field, Dunstone will be a crowd favourite all week at the 14,000-seat venue. He’s scheduled to open play Saturday night against Mike McEwen’s team.

Calgary’s Kevin Koe and Ottawa’s Rachel Homan, who were victorious at the 2017 Ottawa trials, have returned for the Nov. 20-28 competition. Neither team reached the podium at the 2018 Winter Olympics in Pyeongchang, South Korea.

“You get this different intensity about you when you come to an event like this,” McCarville said. “With the lights, the fans and all these great teams, it’s a really exciting feeling.”

The trials are considered the deepest domestic curling event on the quadrennial calendar.

“Against the field that we’re going to be playing this week, you can’t let off the gas even one iota,” Bottcher said.

The winning teams will represent Canada at the 2022 Beijing Games in February.

Dunstone’s breakout title came two years ago when he won the Masters on the Grand Slam circuit. Muyres joined the team last season and the foursome earned a third-place result at the 2021 national men’s championship.

Dunstone fought back tears when asked whether the unexpected lineup change was tough for him personally.

“It’s been hard,” he said after a long pause. “This is (Moskowy’s) moment as much as ours. He has worked his ass off for all of us to be here.”

The team did not say whether Moskowy would miss additional events this season.

Lott, meanwhile, did his best to spring into action on short notice.

After leaving the curling rink on Wednesday night, he got a quick load of laundry done and his mother, who’s a hairdresser, gave him a haircut.

Lott caught a morning flight out of Winnipeg and is ready to rekindle his Olympic dream.

“I’m just so stoked to be here,” he said. “This is such a great opportunity.”