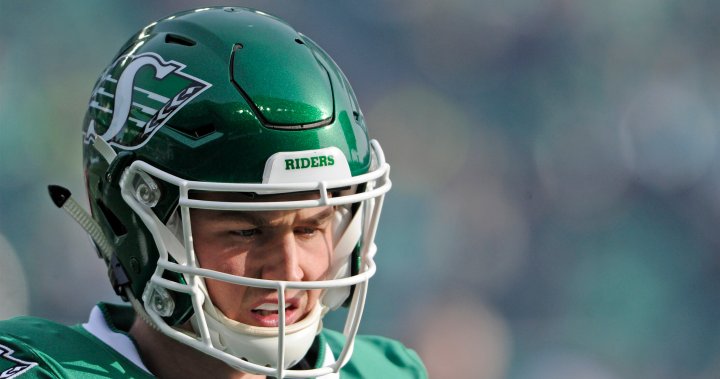 It won’t determine where Saskatchewan finishes in the West Division, but the Roughriders‘ regular-season finale means a lot to Isaac Harker.

Harker will start at quarterback Saturday when Saskatchewan (9-4) visits the Hamilton Tiger-Cats (7-6). The Roughriders have already clinched second in the West so starter Cody Fajardo, running back William Powell, receiver Duke Williams and offensive lineman Dan Clark will be among the veterans not playing.

The start will be Harker’s first this year and just the second of his CFL career. The 26-year-old completed 24-of-28 passes for 213 yards in Saskatchewan’s season-ending 23-13 road win over Edmonton in 2019 that gave the Riders top spot in the West Division.

Harker got the ’19 start after Fajardo suffered an oblique injury during practice.

“I’m a competitor so I want to win,” Harker told reporters during a videoconference Thursday. “As far as I’m concerned we’ve got to win this one and I’m always going to feel that way no matter what the standings or the implications are.

“I’d like to win and play a clean game. I’ve done a lot of work during the season to where I’m very comfortable with the playbook so I’m going to out and be myself and play my game.”

The six-foot, 195-pound Harker is completing his second CFL season with Saskatchewan. He has made 10-of-13 passes for 89 yards in 13 games this year and 54-of-74 for 556 yards with no TDs and three interceptions in 31 career contests.

“I hope he just takes control of the offence,” Saskatchewan head coach Craig Dickenson said of Harker. “He’s had good practices all through this season … and I just expect him to play like he does in practice, which is efficient.

“Is he going to make some mistakes? Yes, but I want to see (a) consistent, steady, reliable performance and I think he’s got that. I want to see a field general, a guy who does a good job of directing traffic and gets the ball to the right people.”

Harker has faced Hamilton before. In Saskatchewan’s 2019 season opener at Tim Hortons Field, he was eight-of-14 passing for 128 yards and two interceptions in relief of injured starter Zach Collaros and Fajardo, then the backup.

But Harker could see Hamilton’s best defensively. The Ticats (7-6) enter the final week of the regular season tied with Montreal (7-6) for second in the East Division.

“I wouldn’t have it any other way,” Harker said. “They’re a very good team and have a Rolodex of different coverages.

“But we’re pretty tuned into what they’re doing so we’re pretty excited about the game plan we’ve got going in.”

Montreal concludes its regular season hosting Ottawa (2-11) on Friday night. A Redblacks win would give Hamilton second spot outright but the Ticats would have to at least match an Alouettes tie or win Saturday to secure home field versus the Als in the East semifinal Nov. 28.

“It (Riders not playing some starters) isn’t going to affect anything,” Hamilton head coach Orlondo Steinauer said. “They’re a 9-4 football team for a reason … whoever they bring they’ll be ready to play.”

“Don is looking good for this week and I would expect him to play,” Steinauer said. “If he’s not ready to play we will not force the issue and he will play in the first round of the playoffs, for sure.”

Hamilton’s plan right now is to go with its veteran starters Saturday but Steinauer said that could change if Ottawa wins Friday night.

“I wouldn’t see our roster changing a whole ton but I would see maybe some backups seeing extended playing time,” he said. “But then there’s kind of a catch-22 there also because those backups are usually playing a lot of special teams so that means your normal starters would have to play teams.

“So there’d be a nice juggling act but we would definitely, probably, give a few people a few reps off. Ultimately everybody is likely going to have to suit (up) but hopefully not play as much.”