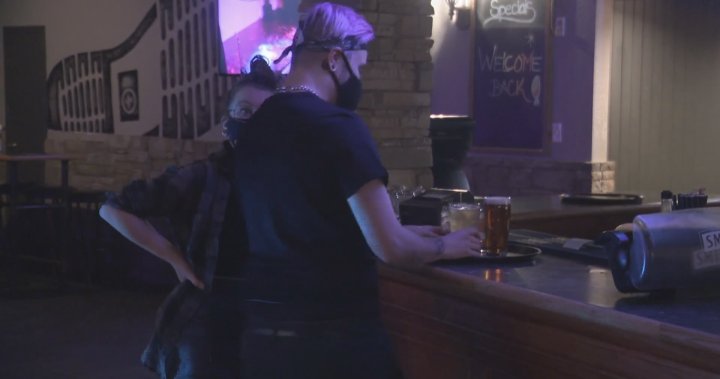 Dickens Pub in Calgary recently reopened to the public after being shut down most of the last two years. Owner Chris Hewitt said he was excited about reopening until he started getting quotes for his insurance from his broker.

“The quotes that we were getting were as much as 600 per cent higher,” he told Global News.

Hewitt asked how that could be and said he was told because his business sells liquor and plays loud music it was “risky”.

“We were told that basically the degree of risk that is associated with live music venues and the pandemic is off the charts right now.”

Hewitt told Global News he does everything he can to minimize any risk at his business and added he has never filed a liability claim in the entire time he’s been in business — 14 years now.

“The frustration for the live music industry is there is nothing we can do about it,” he said. “Everybody knows we must have insurance to be able to operate so they simply tell us ‘This is what it’s going to cost you’ and that’s it, that’s the end of the story.”

He was ultimately able to get a lower cost, still 60 per cent higher than the original price.

The Insurance Bureau of Canada (IBC) told Global News that in terms of commercial liability, insurers are losing a lot of money.

He added that included liability claims for these types of venues.

He said the insurance industry is seeing a growing trend, similar to what has been common south of the border.

“We are seeing a little bit of, if I can suggest, an American influence — that litigious influence creeping in to Canadian society,” he said.

“We’re getting more litigious, we’re seeing more people making claims and suits against establishments if they do get hurt.”

Sutherland said the increased number of claims combined with the increased size of the awards handed down by the courts is putting immense pressure on insurance premiums.

He’s calling on the province and the federal governments to look at both of those, as well as the time limits allowed t

“Currently they (claimants) have up to two years if they’re injured at one of these establishments,” Sutherland pointed out. “That’s an exceedingly long time and it creates a lot of uncertainty for the insurance companies to know what is going on with those claims.”

Sutherland added until all of these things are looked at and changed, premiums will likely continue to rise.

Hewitt doesn’t dispute the fact claims have occurred, but he doesn’t believe to the extent that has been presented. He also added anybody can get hurt anywhere, so he doesn’t know why venues like his are being hit with hikes this hard.

He also questioned why the hike “now” and added it makes no sense, considering everyone was in a holding pattern and not making any claims — certainly not liability claims relating to drunk and hurt patrons.

“It doesn’t follow with what’s been going on,” he told Global News. “We’ve all been closed for so long and then when we were all ready to open again, the costs go through the roof.”