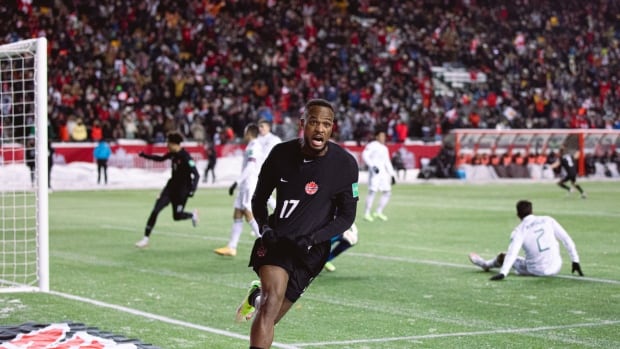 When Cyle Larin showed up in Edmonton ahead of Canada’s World Cup qualifying matches against Costa Rica and Mexico, he was so sick that he couldn’t eat.

He was just well enough to come in for 25 second-half minutes in Friday’s win over Costa Rica.

Still, on Tuesday night at Commonwealth Stadium, Larin enjoyed a record-tying night. His two-goal performance not only propelled Canada to a 2-1 win over Mexico, but put the Canadians at the top of their CONCACAF World Cup group.

As the eight remaining teams in CONCACAF each completed the eighth of their 14-game schedules in the Octagon, Canada (4-0-4), a country that hasn’t been to a World Cup since 1986, is tops. A point up on the Americans. Two points up on the Mexicans and Panamanians. The top three qualify for the 2022 World Cup in Qatar, while the fourth-place team gets a final shot to qualify via an intercontinental playoff.

Larin’s two-goal performance gave him a total of 22 for the national side, tying Dwayne De Rosario as the top Canadian men’s goal-scorer in history.

“I’m happy to to tie the record and hopefully beat it, but I wouldn’t be able to do it without my teammates,” said Larin. “The quality of the guys in front and the guys in the back end and we all played a part in it.”

“With big Cyle, he was feeling ill the first few days when we got here,” said coach John Herdman. “He really hadn’t eaten for, I think it was two days.”

Cyle Larin’s two-goal performance gave him a total of 22 for the national side, tying Dwayne De Rosario as the top Canadian men’s goal-scorer in history and also gave Canada a 2-1 win over Mexico, moving them to the top of their CONCACAF World Cup group. 2:03

Just before the end of the first half, a skipping shot from Canadian defender Alistair Johnston could only be parried by Mexican ‘keeper Guillermo Ochoa. The ball fell right into the path of Larin, who made no mistake.

Johnston’s shot looked to accelerate after it took a wicked hop on the artificial turf, an effect of a slick, cold ball on a hardened playing surface. According to Environment Canada, the game time temperature was at -9 C, with a wind chill of -14 C. If there was a moment that justified Canada Soccer’s decision to stage this game in Edmonton on a November night, that was it.

“The road games are really tough, every country is going to use their terrains to their advantage,” Herdman said. “The games bring out the Canadian in our players. They’ve all grown up on plastic pitches.”

CBC’s Signa Butler is joined by Chris Jones to break down Canada’s World Cup CONCACAF qualification games in Edmonton, including the atmosphere at the game against Costa Rica, the anticipated weather conditions for Tuesday’s match against Mexico, and the optimism surrounding the team as they look to qualify for Qatar 2022. 4:13

Larin struck again seven minutes into the second half, as he side-footed home an inch-perfect cross from Stephen Eustaquio, leaving Ochoa flailing on the goal line.

The Mexicans made it close with an 89th-minute goal from Hector Herrera.

And then, in five minutes of added time, they came at the Canadians in waves, forcing ‘keeper Milan Borjan into two goal-line saves.

“That was the longest six minutes of my bloody life,” Herdman said. “Thank goodness for Milan Borjan and all the other players who put their bodies on the line.”

In added time, Canadian goalkeeper Milan Borjan was forced to make a couple of goal-line saves as Canada held on to a 2-1 win over Mexico. 1:43

Larin’s opener punctuated what was a chippy first half from both teams. Right after the opening kickoff, a Canadian defender flattened Mexican star winger Hirving “Chucky” Lozano. Guatemalan referee Mario Escobar ruled it a legal challenge, but Lozano was down on the turf for several minutes.

The game then transformed into a maelstrom of fouls — a total of 23 in the first half, with 13 of them called on the Mexicans.

Escobar also showed yellow cards to both teams’ benches in the first 45.

But the Mexicans were held to zero attempts on target. It wasn’t until the dying moments of the team, down two goals, that the visitors came alive.

Canadian Prime Minister, Justin Trudeau, paid a visit to the Canadian men’s national soccer team as they prepare to face Mexico in the final round of World Cup qualifiers. After beating Costa Rica 1-0 on Friday, Canada returns to Commonwealth Stadium in Edmonton, but this time it’s going to be a lot colder. The temperature should be hovering at about -6ºC at kickoff on Tuesday evening. 1:01

On a night that Larin was in the spotlight, Atiba Hutchinson started the game for Canada — earning his 90th cap for his country. He passed Julian de Guzman as the most-capped men’s player in Canadian soccer history.

“The boys played our hearts out, we left everything on the pitch,” Hutchinson said. “We knew how important this game was, and we wanted to go out and make a statement.”

The crowd was announced at 44,212 — despite the fact Canada Soccer announced on Monday that more than 50,000 tickets were sold. But Edmonton was hit with heavy snow Monday and through the day Tuesday, leading to no-shows. A total of 48,806 showed up for Friday’s 1-0 triumph over Costa Rica, on a calm 1 C evening.

Crews worked furiously before the game, repainting the field lines and shovelling snow that had accumulated near the pitch.

Tim Weah’s 11th-minute goal was matched by Michail Antonio’s spectacular 34-yard strike in the 22nd minute, leaving the United States with a 1-1 draw against Jamaica in a World Cup qualifier on Tuesday night.

Coming off Friday’s 2-0 home win against Mexico, the U.S. was looking to move into strong position to reach the World Cup as qualifying passed the halfway point. But a point on the road still left the Americans on track to claim one of three spots from North and Central America and the Caribbean.

The U.S., which survived a disallowed Jamaican goal in the 84th minute, has 15 points going into its final six qualifiers and sits alone in second place — one point ahead of Mexico.

Loud reggae played on speakers during warmups before a crowd of 1,100 at 35,000-seat Independence Park, known as The Office, where a statue of Bob Marley sits outside. Because of the COVID-19 pandemic, this was Jamaica’s first home game with fans since October 2019.