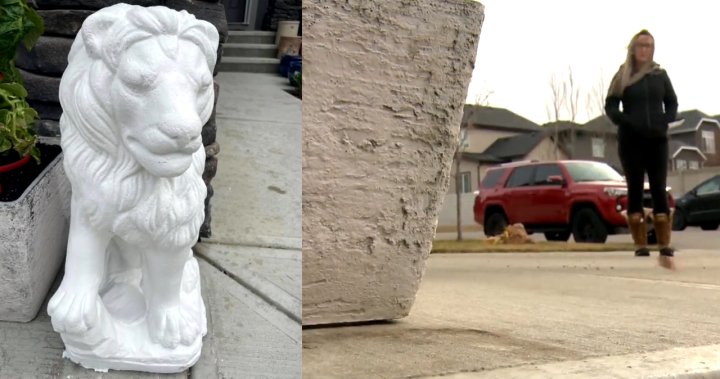 A Calgary family has been left heartbroken and pleading for help after the theft of two lion statues from their home in Evanston.

Rebecca Pham first noticed the statues missing on Nov. 13 after arriving home from a shopping trip.

“I was like, ‘Where are the lions? Who stole my lions?’” she told Global News on Tuesday.

Pham said it couldn’t have been an easy feat. The concrete statues weigh 100 pounds and are two feet tall and one foot wide.

But she said what is heavier is the loss of what they represent: irreplaceable memories of her life with her brother Vincent Finn in the last home they shared in Ontario.

“When he was young, he’d always point up to them and say, ‘Lions, lions,’” Finn said tearfully. “This is the first time I’ve cried” about the loss of the lions.

The statues, which were commissioned by Finn’s husband in 1984, survived the blaze and were recovered from the ashes. Over the next two decades, they went wherever the family went.

“Five places,” Finn said. “These have been lugged all over Canada actually.”

“Last year, my father passed away and my mother moved in with us, and they have been with us ever since,” Pham added.

The lions have had some wear and tear over the years, so Pham recently put her blood, sweat and tears into giving them a much-needed makeover.

“I peeled all of the old paint off, and I refinished them,” she added. “They looked absolutely gorgeous, and I was really proud of them.”

Despite how good they look, Pham doesn’t expect they could resell for much.

“I don’t think you could get more than $100 for them,” she told Global News. “They’re nothing for anybody, but they’re very sentimental for my family and to me, specifically.”

Pham said she filed a police report and canvassed the neighbourhood for clues. She said after she knocked on doors and gathered video surveillance, she was able to piece together different times and vehicles in the area during the time the statues disappeared.

“There was one specific truck that stands out, that is acting very odd on the street. It drives by, it stops in front of my house, drives away and backs up and stayed on our street for a significant amount of time,” Pham said.

“When I narrowed down the times, I can see on the camera when my lions were there, and I can see when they aren’t there. The only time is that truck driving by my house.”

Police have not confirmed if they are investigating or any connection between the truck and the statues. Again, the suspicion is Pham’s alone.

Pham and Finn added they’re not looking to get anyone in trouble; they just want the lions back — safe and sound.

“Whoever has taken them, please bring them back,” Finn urged, “so we can continue on having them here for my grandson and tell him the stories.”

“They are the last thing we have.”