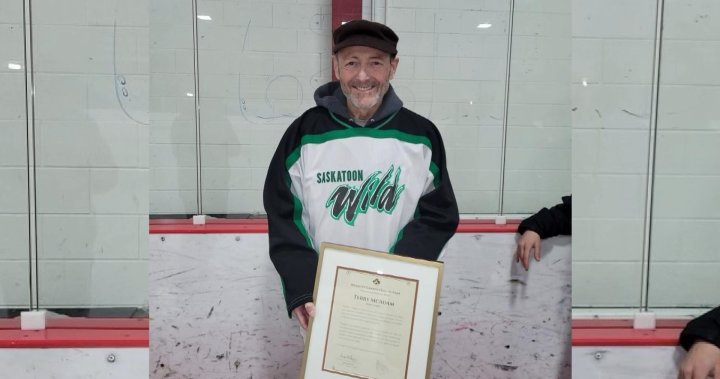 After more than 20 years of coaching and making an impact in the ringette community in Canada, a Saskatchewan man received the ultimate level of recognition.

A coach, a father, a friend, Terry McAdam has dedicated numerous hours to the sport of ringette.

His passion for the game stemmed from his daughters joining the sport and needing coaches.

McAdam decided to help out and from there he never stopped volunteering or loving the game of ringette.

Newly retired, he has coached at every level, helped develop the National Ringette League (NRL) in Canada, and kickstarted a local team, the Saskatoon Wild.

From volunteering and organizing events to being an active board member locally, provincially and nationally, it only made sense for McAdam’s next role to be as a Ringette Canada Hall of Fame inductee.

“Seeing the involvement of people from across Canada in it and to be in that company is pretty humbling,” McAdam said.

The honour came as no surprise to people around McAdam.

Selfless, passionate, respected, devoted, and leader are all words commonly used to describe the beloved coach.

Mel Brockman, who has known McAdam for nearly 20 years on and off the ice, spearheaded the induction.

“Terry has been deserving of this for a long time,” Brockman said. “Everything he’s put into this sport has inspired myself and many others to give back in the way he has.”

McAdam is only one of five people to be inducted from Saskatchewan.

He joins the shortlist after one of his friends and co-coaches, Dwayne Andreen.

The new inductee said his favourite part of ringette over the years has been meeting so many amazing people.

“When you get with people who are dedicated to any endeavour, if people give you energy, then I think you’re in the right place and I definitely got that,” McAdam said.

Although he has stepped back from coaching, McAdam continues to watch his daughters play ringette and cheer them on from the sidelines.